When I first adopted this Maine Coon I did not know if it was a boy or a girl. I was calling it Daisy.

One day when he was about 10 weeks old he was playing in our spare room and got a fishing hook caught in his paw! I took him straight to the vet where they removed the hook.

I asked them to tell me if it was a boy or a girl and so I then found I could not call him Daisy anymore. My daughter came with me to the vet and suggested Captain Hook for his new name!

My handsome brother
by: Rocco Stevens
Aren't we the handsomest 'Coon cats ever?

CAPTAIN HOOK
by: Patti
Oh your boys are fabulous. Aren't they just the best breed ever? I love the bigness of them, they're terrific!! Thanks for sharing...

Captain Hook & Rocco
These boys are brothers, adopted at the same time by co-workers who love animals. It's fun to discuss their behaviors and growth. They are truly amazing.

Thanks Patti
by: Kathy Boyd
Hi Patti, Maine Coon Cats are the best. I love everything about them. They are so intelligent. Thanks for your comments. 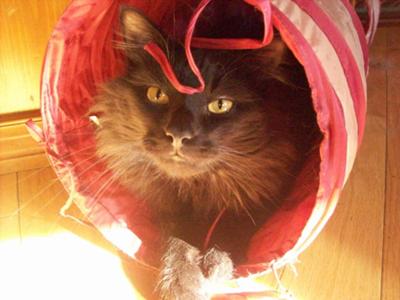 Rocco is full of sweet and loving personality. He is curious and loves to play, and he carries around his "babies" (beanie baby cats)and yells loudly at them when they are not behaving.

Holidays
by: Captain Hook
Hey Rocco, I got you an awesome Christmas present. Kathy picked up some real cool catnip at a craft fair for both of us. It's very strong and smells out of this world. I'm also getting you some tasty cat treats. They are my favorite. Love you brother. Happy Holidays!! Captain Hook

Grooming
by: Kathy Boyd.
Captain Hook does not like to be brushed. He will often bite and attack the comb. As a result of this, I take him to a groomer.

She loves him, and when I pick him up he looks awesome and she always adds a little something like a ribbon or a scarf.

The other day I tried to comb him and he grabbed hold of the comb with his teeth, walked into the kitchen with it and dropped it in front of the trash can. I guess that's what he thinks about that.

Alysha's cats
by: Betsy Stevens
Hi, thanks for your message! Your kitties sound adorable - are their pictures on this site?

We have their Aussie twins!
by: Alysha
Your boys are so handsome and cute! It would be fun for you both to share their stories and adventures. Do they see each other at all? :)

When my Husband and I saw Rocco and Captain Hook's profiles, we had a bit of a giggle - we have their Australian twins!

We adopted two brothers from a animal rescue organization. One black smoke, Pippin, and one tabby. Just like Captain Hook, we were told at first, that the tabby he was a she and was called Britney! He is now called Merry!

They are only five months old, so much smaller, but looking at your photos is like seeing the future Pippin and Merry. :)