Here are Tigger, Huey Lewis, Finnegan, and more. Their families are asking if they are part Maine Coon. Chime in! 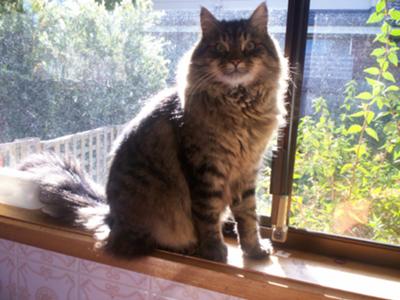 We adopted Tigger from our local animal shelter when he was 3 months old.

We initially thought he was a girl because the vets couldn't find boy parts for all the fur haha.
I didn't know what a Maine Coon was when I adopted him. But now I'm sure he is mostly Coon. =)

He is now 3 years old and he is HUGE, has the fur between his toes, pointed ears, double coat and mane.

He is our big beautiful boy. =)

Who else thinks he has Coon in him?

comments:
Another Tigger!
by: Ellece

What a beautiful boy! I recently adopted a shelter kitty, a gorgeous, big, green-eyed tabby, and guess what his name is... Tigger!

I suspected he might be a Maine Coon mix the moment I saw him, and now that I have found this site, I am even more convinced.

My Tigger even has that wide black stripe running down his backbone, wow. He is THE most affectionate and loving cat I have ever had, and I just love him so much!

for sure Maine Coon!
by: Melissa

I have Gizmo, full maine coon and he looks just like your cat! Gizmo weighs 27 pounds!!!

I agree he is a lot Maine Coon. Just look at those feetsies and that beautiful coat and tail.

Think so, that is. In addition to the traits you mention, he has that boxy muzzle. He's a cutey!

This is Frank. I got him at an animal hospital a year ago and they said they were pretty sure he was at least part Maine Coon.

He has fur coming out from between his toes like they describe on this site. He's pretty relaxed in general and never aggressive, but sometimes pretty needy.

He has a super bushy tail (in photo)and he's really long, but he doesn't weigh more than 10 pounds right now.

What do you guys think?

Is He An MC Or Maybe A Part MC? 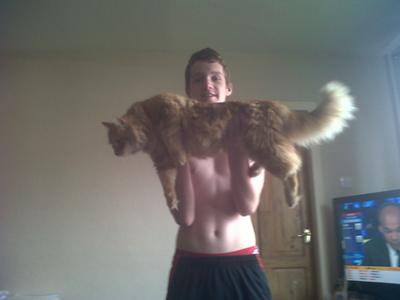 George is our kitten who was 1 on St Georges Day (hence the name).

George really thinks he is a dog..he plays fetch. We have had him since he was 7 weeks old and from our first visit to the vet who informed us he would be a big one we have known he is special.

He has the tell tale tufts of fur between his toes, he has the fur in his ears...and what can we say about his tail only that it is as long (IF NOT LONGER) than his body.

He is not a lap cat, he likes to sit next to people. He chirps his greeting when we get in from work. He also lets you know when he wants attention by making the funniest of sounds. He was 1 on the 23rd of April.

After doing some research we were wondering whether our George may have some Maine Coon in him...

What do you think?

comments:
I say yes!
by: Anonymous

I definitely say he's a Maine Coon. His appearance, him playing fetch, acting like a dog, and following you everywhere are all clinchers! He's a beauty!

We had George to the vets for his booster and they weighed him he is 4.6kg...the vet says he is overweight, as he has a small frame...!!He has developed a liking for yoghurt too...

How much does he weigh?
by: purpleangie28cats

I have to say I have no idea how heavy George is..how would I weigh him he never sits still!!!


He has taken to following me around the house and we can't close the doors he goes ballistic!!I also have to say since I started giving him a sachet of wet food once a day as well as his dry food he is a much happier cat.

I am beginning to think he was hungry before, he was constantly begging for food.

He looks like a MC from the picture. My old one played fetch too! Got to ask, how much does he weigh?

Is He A MC Or Maybe A Part MC
by: Anonymous

Which creature in the photo are you questioning? The hairy one or the furless one?

He is a beauty! We have 2 Maine Coon cats and he certainly looks like he could well have some Maine Coon in him -- he's a big guy for sure! 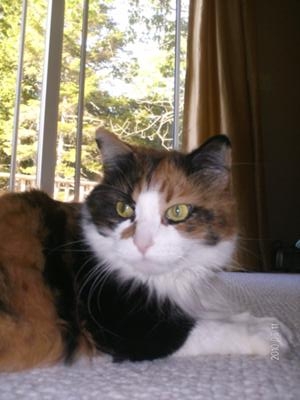 We're pretty sure she's Coon - meeting the traits and the character. She's just like a dog, opens doors, gets in the tub, picks up small toys and pens and trades them, stands on her back legs to reach you. She trills and talks and follows us around like a dog. She comes when called, and is very easily trained. She has five toes, but not an "extra paw' per se...and the fur comes out on the bottoms of her feet.

We adopted her from the local humane shelter as an adult (2yrs old).

Is Roxy a coon? We're very lucky to have her.

Roxy is a pretty girl, and so lucky to have gotten a home with you!

She's a great example of a mystery cat. One who may be a Maine Coon mix. (if she were a full Maine Coon she'd have the pointy tufts on the tips of the ears)

With all those traits you described, along with that tail & those fluffy toes, Roxy may have some Coon in there!

Thanks for sharing her!
~Carrie

by Grazyna Weimann
(Plano, TX, US)

We adopted him from the shelter. He is 3 months old. I was wondering if he has something from coon because he is extremely family oriented :-)

He loves to play with kids and he is very gentle during the play even though he is a kitten. He has never ever scratched anything or anybody. He bites a little but as well he is gentle.

He comes to you when you call his name, always comes to welcome you at the entrance door. When you tell him go to your place he goes he is miauing though and showing you he doesn't want to but he goes :-)

He is very good family pet we love him.

What a sweetheart! And a super-cool name, too! Well, there's no way to know for sure. He is fluffy, and he certainly could be a Maine Coon mix. As he grows you'll see how he looks, too.

Thanks for sharing him! We'll be sure to add him to our kitten album, too!

I just recently adopted my kitten (have not named her yet)and well so I've heard she looks like she could be part Maine Coon, and wanted to know what you think? I'd greatly appreciate your answers! :)

The first pic is my little kitten and the second is her sister who was adopted by someone else.

Your kitten looks adorable...can't wait to hear what you are going to name her....keep posting the pictures...

I saw the picture posted by the exit of our local pet store. An adorable blue eyed orange fluff ball stared out asking for a forever home. Bad timing as I was just about to drive south for a week. I thought another cat would make three and the title "crazy cat lady" would soon follow!

I left the store only to return moments later to take down his info. His current caretaker informed me that he had a big personality and would most benefit with another cat in the home. A week later I returned from vacation and picked up the little ragamuffin. A few days later my neighbors called me "the crazy cat lady".

It took a couple days to name him, and after numerous suggestions I turned to my Scottish roots and found the name Finnegan. It's meaning.. little fair one, a perfect fit for him. The name and meaning stuck and Finn has been a wonderful, spunky, spirited, hilarious addition to our home!

His characteristics in appearance and personality match what I've read and seen... large plume like tail, big mane, loooong whiskers, and hair between his toes. Finn's personality is just as large as he greets us at the door, answers when talked to and always brings us his toys. He also puts himself in the center of any activity just to enjoy the chaotic fun.. Humm minus the hair, I wonder if I'm part Maine Coon..

Finn will be a year old in February and we look forward to a long and entertaining life with him : ) Pictures to follow.. H