by E. Williams in Michigan 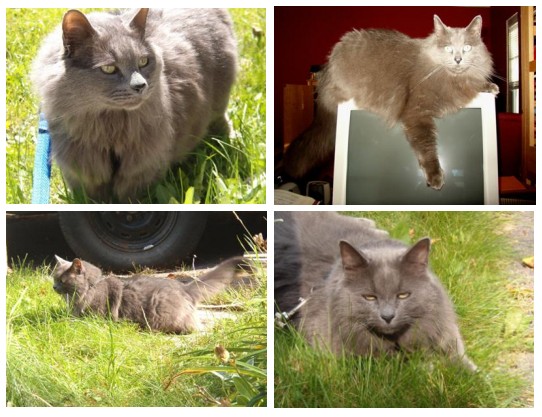 Our cat Shadow seems to me like a candidate for Maine Coon. He's 16lbs, all grey and has long hair.

He has a big ruff and his chest hair is long and wavy, he has lots of down and the hair on his back and towards and including his fluffy tail is more coarse and straight.

He has long fur between his toes. He is super cuddly,a velcro cat- and has to be where we are all the time. He was very quiet when we got him ( from a friend who got him from the pound) but I've been talking to him and now you can't shut him up.

He's an inside cat, but when he sneaked out on a rainy day and came back-he was hardly wet at all-it was almost like his fur was water proof-just the tips were wet. He loves to jump and can probably jump almost 5'. He is very muscular.

More about Shadow by: E. Williams

Shadow is on a leash ( Med. size dog harness actually, so he won't choke himself -or wiggle out of a collar-cats do that- they turn around and back their way out of it) for his own protection. We live on a busy street and there are lots of dogs in the neighborhood~ and last year a hawk killed a pigeon in our yard. He's such a friendly thing he's not afraid of anything or anybody. Real "babe in the woods" when it comes to danger- and declawed~ so we take him out for walks around our lot, so he can munch on grass -he's never left unsupervised~ again, for his own protection.

Hi There,
I love your photos! Shadow is walking on a leash in these pictures, that's great! He has a real regal look to him.

Based on everything you said, including the "talking", the furry toes, his weight, and everything else, he sounds like a Maine Coon mix to me. Probably half. I visited a family with a half Coon this past weekend who looked almost exactly like Shadow, only black.

If he were full Maine Coon I'd see the ear tufts, and a slightly shaggier coat.

As you know, this is still just an opinion. All cats without parentage history are a mystery! But with that said, I think he is an excellent example of what a Maine Coon mix looks like.
Carrie

Is Our Kitty A Maine Coon? We Think He Is.

by George in Ohio 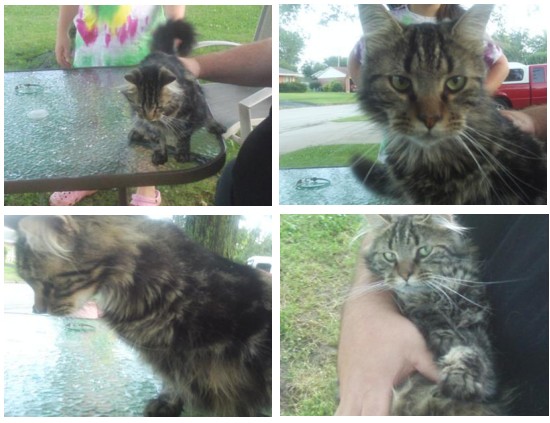 We have a kitty we think is about a year old. He has been with us about nine months. He is a sweety but will play with (and claw and "alligator mouth") everything that moves even our hands!

He loves to play with other kitties. His favorite game is to run up and run into them and roll them over! He isn't a "cuddle baby" prefers to sit at our feet or sleep at the foot of the bed but will come for love at times, usually at bedtime when he wants to lay right against your face lol.

He doesn't really meow. Usually you "see" his meowing instead of hearing it.

He is such a sweety by: Scarlett

As he lays on the sofa curled up in a tiny ball right now, I am looking forward to going to bed! I know he will come join us and love us up! Why can't he be so sweet the rest of the day? Of course I am sure it is because we step on him all the time because he is always at our feet!

That is another common trait. The boys, especially, tend to remain playful and kitten-like right into adulthood. That, along with the furry toes is more evidence!

Yes he does have the tuffs on the toes! And for being about 1 year old now roughly, he is the most playful cat i've seen.

He's got the look... by: Maine Coon Cat Nation

Hi George,
You've got some pretty good shots there. First off, I'd say he definitely has the look down! Shaggy coat, a nice ruff coming in, and looong whiskers, not to mention all the fur coming out of his ears. Does he have tufts on the tips?

I love how you mention he has a silent meow. That could be a clue. The most important judge is you, though! You've read through the characteristics, etc., and you know him better than anyone else.

If you got him at about 3 months of age, and he wasn't being sold by a breeder, he's probably a Maine Coon mix. Just like any other cat breed, a purebred kitten will come with a pedigree.

Based on the photos alone, your cat has a very strong case!

Is my cat part coon cat? 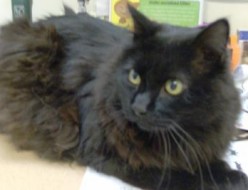 Her name is Midnight, she is nine years old, she weighs about 12 pounds. She is mostly black with some brown around the neck and some on her sides. She can be very vocal, she lets you know what she wants and won't stop meowing until she gets it.

She likes being outside most of the time. She is kind of shy with strangers. But is there to meet me when I get home from work. She likes belly rubs and pets on her head. She has black whiskers and black claws.

By the looks of her, which strongly resembles my black male Coone Cat, I'd say you have a Coon Cat.

I'm amazed at how much Midnight looks just like my Alice! (my daughter came in and did a double-take!) The only real difference is the tips of the ears. Midnight is such a pretty girl- that's the perfect name for her.

The part that makes it hard to tell is that so many black cats can look alike.

If she were full Coon I would look for fur on the tips of the ears, plenty of fur coming out from between her toes, and a nice "ruff" like a lion's mane.

But, she does have a nice shaggy coat, just like a Coon. And 12 pounds is pretty substantial for a female. She's vocal, too (though many cats can be vocal)

Cases like these have to remain a mystery, since we just don't know the parents, but is she a mix? She might be! If you would like to introduce her as a Maine Coon mix, or Maine Coon type, go right on ahead!