by Eleanor
(The Wild Mountains)

Asad means "lion" in Arabic. This is a very special and very lucky boy. I found him in the middle of the night at a McDonald's drive-through in a bad part of town.

I was with my boyfriend, and after hearing a kitten cry when I pulled up to place my order, I parked the car and started searching for the source of all the crying. 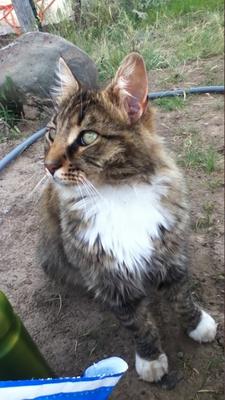 I saw a tiny little face and two huge ears with long black tufts wobbling just above the grass next to the "Place Your Order" speaker.

The lawn was freshly cut, but little Romeo was so tiny, he could barely keep his chin above the grass.

When I walked over the pick him up, he bolted and hid inside the spinning hubcaps of a gangster's car that was waiting in line.

I begged the guy to stop and not go forward because there was a kitten in his wheel. I crawled under the car and got the little guy out.

He fit in the palm of my hand, stretched out and exhausted. His eyes were gummed shut and leaking fluid, and his fur was crawling with fleas and beetles as big as my fingernail.

He couldn't see, but I massaged him and talked to him and he managed to sniff out the can of fish flavored wet cat food I bought at the 24 hour Walgreens down the street.

He was painfully thin, so I fed him in the car, on my lap. I refused to drive any further without getting him fed and re-hydrated. He ate, lapped water mixed with juice from the wet food, and fell asleep.

His belly was swollen and I was worried about his health. It was a relief when he went to the bathroom for the first time (and made a fuss untill I got the mess away from him--he's been a very clean kitty his entire life) but I was appalled at what came out of him.

It looked like he had been eating the same bugs that had been crawling through his fur, even though his teeth were still very small and he couldn't really chew them up much.

I took him to the vet the next day, and was told the bad news. Baby Romeo was probably about 4 weeks old, and it was nothing short of a miracle that he was still alive.

He had a cold, a tummy full of parasites, and so many fleas that he was horribly anemic. He was so anemic, he was having heart palpitations.

It was the most severe case of anemia the vet had ever seen. He expected Romeo would die within a matter of days.

He was too small for any flea medicine, and the vet could only guess at the dosage and frequency for antibiotics and iron supplements for such a tiny kitten.

It was very fortunate I didn't have a job for the next few weeks that summer.

I gave him as much food and water as he would take (the vet's orders), gave him his meds in tiny doses every four hours (even through the night) and gave him a bath three times a day, picking the bugs and fleas off of him by hand, and gently wiping his eyes clean every time they gummed up.

He slept with a teddy bear that was twice as big as he was (it's still his teddy), inside an open cardboard box that I kept with me 24/7.

He had good days and bad days (he went into a coma once and I revived him with an eyedropper of diluted maple syrup--then he had diarrhea and got really dehydrated) but every day he kept on eating and growing like he knew his survival depended on it.

The day I knew he was going to prove the vet wrong, I woke up in the gray dawn light to tiny little paws walking up my stomach and a squeaky little voice telling me hello.

His eyes were clear and bright--for the first time I could see the line of creamy white fur around them. He wriggled up to my ear and started licking and sucking on my earlobe, purring and "huffing" right in my ear.

He grew up while I was in college and stuck by me through some terribly tough times. After many different homes, dorm rooms and cars, he and I have come home to the Rocky Mountain west where he is now the king of the mountains, stalking and chasing anything from deer to neighborhood dogs.

He is the most loyal, loving, tolerant, intelligent animal I have ever met.

comments:
Asad
by: Jessy
Back when I was a student of Arabic, I had a tortoiseshell cat I named Asad, even though Asad was a she.

The vet at the SPCA told me to forget her and take another cat: she had distemper. I refused. Whether the diagnosis was wrong or she was a tough little kitty, she lived to a ripe old age and she too was the keeper of my memories--college years, early working years, motherhood.

Thank you all!
by: Eleanor
Thank you all for your kind comments. I actually would love to talk to any of you have experience rescuing a main coon or main coon mix kitten and raising it without feline socialization.

Romeo and I have had some discipline issues and I would love to compare notes with anyone else who has had to teach a Maine Coon all the things a mother cat and/or litter mates/other cats would normally teach him, especially no hard biting or painful scratching during playtime and gentle communication of his wants and needs (i.e. no biting ankles and hanging on when he wants food/attention.)

We've solved these issues for the most part and he is very responsive to my communication with him, but now we have a new problem:

Have any of you had problems with a vet not doing a good job neutering your Main Coon boy? Or a neutered boy still getting...excited... and trying to hump you?

It's awkward for both of us and honestly very weird. Romeo gets upset and confused and starts shaking every time it happens, so I'm eager to figure out a solution to his little problem.

I've never had a cat go through anything like this, even the tomcats (domestic shorthairs) I had when I was a kid who were not neutered.

Raising a Romeo from a pre-weaned stage without feline socialization has presented some really strange problems before, so I'm wondering if that's a factor.

I'm thinking it's something odd with his hormone balance and maybe something odd psychologically. But I really don't know. Any thoughts would be greatly appreciated.

Thanks
by: Khadija
I just want to thank you for what you did. God bless you.

Great Tail!
by: Achilles' & Benny's mom
Wonderful story! If only the world were filled with people like you! Thank you so much for saving Asad's life and sharing his "tail!"

You were his angel...
by: Carol
Hi, my husband brought our little oil covered 4 week home from work. It took 4 baths to tell what color he was.

The little buff guy had eaten so much oil from his fur that he passed black stools for weeks. He only had one eye and was a tiny little weak kitten like your Asad. Funny my vet said he looked like a little lion...

He tamed many feral kittens to find homes. He was my best funny friend for 11 years. I still cry everyday for my buddy. His story is on here. Scrappy was his name...He was the best cat I ever knew...Good luck with your little man...

Beautiful Romeo
by: Lily
Thank you so much for sharing! I'm glad that you found your wonderful boy and gave him a chance to live!

You have shown a lot of patience and you have definitely been rewarded for your efforts! Much love to you both!

Thank you for sharing.
by: Anonymous
Thank you so much for sharing. You are a very kind and special person and Romeo Asad deserves a human like you. Best of luck to you both.

I lost my furkids seven years ago, but one of these days I hope to get some new kids and I hope they are wonderful kids like your Romeo.

You have a kind heart and I wish the best of luck to you both.

What a loveful story
by: Wolf D.
The most loveful Maine-Coon story ever read. Hopefully you'll have a long lasting time together....

lion
by: phyllis
That was the greatest story i have ever heard im grateful you saved him

Happy story
by: Kelly
What a wonderful story. My big guy was a stray that I took I on a very cold January night back in 1997.

He was covered in car oil from sleeping under car hoods and was shot full of BB's. He has lived a very happy long life with me. He has started having health problems now that he is aprox 15/16 yrs in age.

Yesterday I was told he is suffering from kidney failure. He is taking medication to help, but it will only help for so long. I am giving him all the love I can until it is time to say goodbye.

Return to Top of Romeo Asad