TJ is seven months old and was dumped in a ballpark at six weeks. He has fur between his toes, ears, and a long fluffy tail like a duster. He has a thick belly of fur and a lion's mane on his face.

He cries when he thinks he is alone and likes to eat our dog's food when he is eating. TJ will groom the dog, licking his fur and paws. The dog is at least 75 pounds, but he tolerates it. :) TJ will chase a ball and bring it back to you and knows where things are hidden that he is not supposed to play with such as hair ties. We think he may be a Maine Coon, but not sure. 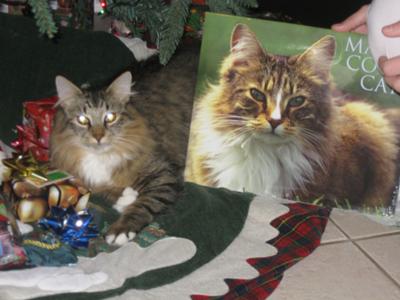 For: Jody Colpitts
by: Debbie

Yes!!! I walked down the hall the other day and around the corner and there he was sitting staring up at me with his tongue sticking out. I asked him what was he was doing and he just looked up at me.

One day he just seemed to blossom into a maine coon. Some days I call him Thuggy because he wants to be the ruler of the cats even though there are 2 who are older and he rules the dog who is a chow mix --2 years old who lets him. Soon I will post a new pic of him!! Lots of personality

your kitty looks just like mine!
by: Jodi Colpitts

I clicked on your picture because he looks just like my willow! the way he lays, and the crying thing! omg! right down to the furry toes! does your stick his tongue out too?

Love your cat
by: Deborah
Your cat is beautiful! Is it just a Maine Coon thing or do all cats lay on their backs like that? My cat sleeps like that all the time - right in the middle of the family room - right in the footpath of everyone, including the dogs!

He's Got The Look!
by: Maine Coon Cat Nation

Wow, you don't see a stray or abandoned cat that looks like that every day! He's got the Maine Coon look down pat. I can even make out the ear tufts in this picture.

When it comes to young kittens I often stress the fact that it's many times more likely that they are a Maine Coon mix than a full Maine Coon cat. That's because if someone finds an abandoned kitten it couldn't have come from a Maine Coon breeder. Possibly it's a mix & the irresponsible owners didn't know what a beautiful cat the kitten would turn out to be.

In TJ's case, I would wager to guess he's a Maine Coon mix. He sure looks as much like a Maine Coon as any other! And he's got the wonderful personality to boot! I love the way he's stretched out in this photo, just like a confident Maine Coon.

Finding an abandined full Maine Coon could happen in rare cases such as:

1) When a kitten is purchased and then lost.
2)Or, two un-spayed/neutered full Coons got together, and on top of that, the owners didn't realize the kittens are of value. (unlikely as you might imagine)

In any case I think it's a safe bet to say TJ has some (maybe lots!) of Maine Coon in him!

Thanks for sharing him!
~Carrie