This is our baby Louie. He came to us un-expectantly. We were already owned by three cats, all tabbies. Two of the three were homeless, and the third was adopted from the Humane Society.

In July of 2011 our neighbor came to us asking if he could use our cat carrier because there was a momma cat in his backyard who had given birth to four kittens. 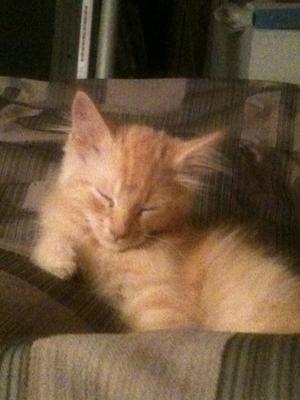 Louie as a kitten

The momma and two of the four kittens had disappeared and he wanted to capture the last two kittens and take them to the humane society before something happened to them.

Of course being the cat lover that I am, I HAD to go see the kittens. As expected the kittens were hiding.

So, we put some food in the carrier and waited. The next morning the two kittens were in the carrier, sleeping, and what seemed happy.

When he got home he told my oldest son where the kittens are. I called the shelter only to be told that the kittens would be euthanized by the end of the day. Well, there was no way my husband and I were going to allow that.

So, off my husband went to the animal shelter to bring those two sweet little babies home.

But, only on the condition that my co-worker take the other kitten, and that we would try to find a home for the kitten we were taking care of.

We sent emails to friends asking if they would like a new addition to their home. We even offered to neuter and get the first year shots for the kitten. We had no takers. So, Louie became a part of our family and I couldn't be more happy.

It took some time for Louie to become comfortable in his new home and with his new family members both human and feline. Eventually after about a week, Louie warmed up to everyone and fit right in.

I couldn't be more happy than to have Louie a member of our family. He is the most loving, and gentle cat.

He has the softest meow, and is very intelligent. He loves to play catch with us, actually carrying his ball in his mouth and dropping it at our feet so we will throw it. He loves to be with his people.

If we are working in the study, there's Louie, laying on our worktable, or across my computer keyboard.

When he lays on the bed with us, I usually have to adjust myself so he can stretch out which consists of stretching across almost the entire length of our queen size bed.

If we call Louie's name he comes running. If we leave one room to go to another, he hops up and follows us to the next room.

Louie has been a wonderful addition to our family.

comments:
Definitely a Maine Coon
by: Carol
Louie is so sweet and so are you and your husband to take the time and care to save these precious little ones.

Louie is definitely a MC, if but a mix. He has the tufts on tops of his ears, the mane, round face, long hair and big feet. Plus he is exhibiting traits of a MC by following you around and fetching. Enjoy your boy and the treasure that he is.

Lovely Lovable Louie!
by: Anonymous
Loved your story! It has a very familiar ring. Percy came to us under similar circumstance - feral kittens under a my daughter's warehouse. Promises of homes fell through and, I took the three we caught to a spay/neuter clinic a month later.

Percy came home with me "to be tamed" for an interested party. He immediately wrapped himself around our heart strings and there was no letting him go. He is orange and white and could pass for Louie's brother. So happy for both of us! :)

He is the lucky one
by: Anonymous
When i hear rescue stories it warms my heart. Ive rescued quite a few in my day and like you I would take them in on the condition to find them a good home.

With that said I'm now owned by three strays and two that we got at a shelter. Louie is lucky that he came across cat lovers like your husband and yourself.

Every time I look at my lil ones I know I've made the right decisions by adopting them.

In reply to "Lucky Louie and YOU!"
by: Lisa
Thank you for the compliments on Louie. He is such a lovable companion and addition to our family.

I do know there is a stray Maine Coon in the area. I myself have not seen her, however, the humane society in my area has had Maine Coon kittens in the past. I would be willing to bet they are relatives of Louie's.

Yes, his brother was just as red. and just as beautiful.

Your story about your babies is adorable. I had to chuckle when you said you turn around and your 4 legged babies are following right behind. That sounds like my house as well!

Lucky Louie and YOU!
by: Jayne Brown
What a HANDSOME GORGEOUS BOY! That is the coloring I have been looking for and as one of the other people who have left a comment stated .... REDS are hard to find!

He is gorgeous. Makes you wonder WHO had the mother and why SHE was a stray? People sometimes don't realize the GEM THEY HOLD!

Lucky Louie and lucky, lucky you! Was his brother as so a red?

Such a loving story. I also know what you mean about the bed, the computer keyboard, and being followed around. Sometimes I turn around to go back to get something and I have 4 - 4legged babies following me! I LOVE IT!!! I just say come on girls- I forgot something! They turn and follow me back! Too Funny!!!

You are lucky, enjoy him...
by: Carol
Hi, lucky you. I had my Scrappy for 11 years. He was rescued from a scrap yard as a kitten. He was the best present my husband ever gave me. We lost him to heart disease in 2011 and I still cry everyday.

We have 10 other rescue cats, but no one comes close to our Scrappy. He acted a lot like your guy and looked like him too. He also loved water and taking care of feral kittens.

His best friend (besides me) was a Rat terrier Chihuahua mix. She still tries to play with the one rescue that looks like Scrappy, but he is not interested. Please take your guy and have his heart tested at 5 years old.

They can be put on meds that will help...Coonies are prone to get heart disease...Now my heart is broken....

In response to "Our Golden Beauties"
by: Lisa
Louie's sibling is doing just great! He is happy with his family, both human and of the animal kingdom. Louie's sibling lives with a parrot, cats, and a deaf dog.

I am too afraid to let Louie outside, although to be honest, I don't think he would go outside. He prefers to be in the safe confines of his home.

He loves to look out the front door and watch the kids get on and off the school bus, but other than than, if we go near the door to open it, he will run away.

I am thinking it is due in part to his rough beginning he had with living outside.

Our Golden Beauties
by: Anonymous
I have a stray that looks just like Louie... I call him Lucky because he is very lucky to be with us as it your Louie to be with you.

Someone must have dropped him off at my daughters and when I got home from Co. that day she brought him over because she is allergic to cats .. We already had 2 cats of my daughters and now Lucky...

We have since had to put one of the 18 yr olds to sleep but have the other 18 yr old and another black kitty that no one wanted. They all cuddle and play and I wouldn't trade any of them for a million dollars...

Maine Coons are so different... very much like a dog in a cats outfit. When we are outside I call him and he comes...

I do not like him going out because I believe they should be happy enough indoors but I do not know his background and he stays close and we do have an acre with a woods in back that he wanders to but I sure would prefer him to be a happy indoor cat.

Aren't cats wonderful... Lucky Louie, How is the other one sibling of Louie's doing?

Red head!!!
by: Anonymous
What a beautiful baby! Reds are pretty rare for coonies so u r very lucky :)

Louie
by: Jessy
Cute! A near-ringer for my Jasper, except with less white.