By: Angie in Pennsylvania 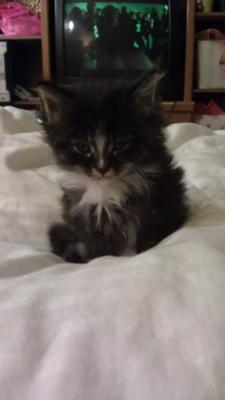 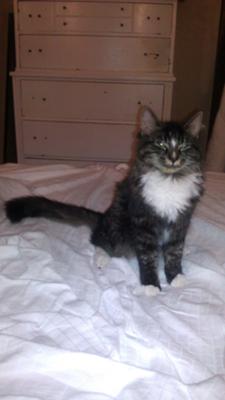 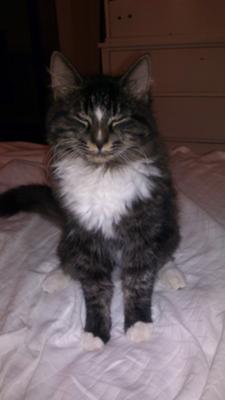 Bibsy is different than every cat we have ever had, He really does not believe he is a cat by any means. I'd guess I'd have to say he acts like a monkey/dog/a rambunctious 4 yr old little boy and at times a baby. AND he definitely thinks he is much smaller than he really is!!!

He came from one of our clients whom was elderly, had several cats, they had kittens and shortly after she was placed in assisted living... so needless to say much information about his parents is pretty much unknown.

Bibsy got his name because of his "bib" like white fur on his neck.

He has a very different quirky goofball type personality and fits in well with our family. We have 4 children which till they have their friends over we usually have a house full of kids playing and just being kids and Bibsy is right there in the action playing with them and at times he's the instigator!!

He's approx 8 months old now and is getting HUGE!! Not overweight but just a BIG kitty!! His fur is getting longer and fuller what seems like daily and his tail looks like a great big super full duster.

He sleeps in bed with my husband and I most of the time but he doesn't curl up at the foot of the bed like most cats... he's gotta be laying stretched out like a person would be, sometimes even on his back. The fur on his underside is incredibly full as well.

He loves water, he insists on trying to drink from every water source, sinks, toilets, cuts, and even the bath tub even when he has fresh water (and yes he's spoiled and really likes it with ice). As soon as I turn on the bath tub water he will come flying in from other floors of the house, he is obsessed with the bath tub. I swear if I let him stay in the bathroom I can NOT get a peaceful bath because he doesn't care if he falls in.

Any box, container, purse, etc. he can find he tries to lay in it, he doesn't realize that he doesn't fit and even crawls in my purse when its hanging on a chair. He'll allow our 3yr old daughter to wrap him up in a blanket when she's playing baby's and he doesn't get bothered by it at all.

He will act goofy at the most random times.

He also has this thing that he still nurses, well when he finds a soft blanket and he especially LOVES my robes.

He will also sit by the door and "cry" when any of us leaves...

The weirdest thing he does is he'll bite the hair on my husbands arms and pull it out and keep doing it... pretty much nightly as soon as my husband falls asleep. Like he's a monkey grooming his baby or something... its really strange.

He is such a sweet little boy and loved so very much by our family and we couldn't imagine ever having to part with him but he is also the goofiest kitty with some of the most bizarre habits its funny at times to just watch him because he acts likes he's putting on a show and you never know what kookie thing he'll do next.

In my opinion I would almost guess that he's Maine Coon or at least a mix... the woman we had gotten him from had several cats and they all appeared to be Maine Coon but theres no way of getting in touch with her now. What do you guys think?

This is a wonderful site and I am so glad that I found it. It has provided us with tons of information and has been very informative. Great job of compiling so much information on Maine Coon kitties.