Wow, we really love our tabby cats! My two tabbies were named Nettie and Bianca. Nettie was my first cat, and she was such a love. I remember dressing her up and cradling her. She was a dignified lady who put up with a little girls love!

Bianca came along in my teens. She was the absolute sweetest, most loving pet I've had. Not a moment went by that she wouldn't most prefer to be snuggling, purring, kneading and loving on a person. I can't imagine life without a tabby cat.

Well, enough about me! Here are your tributes to tabby cats! 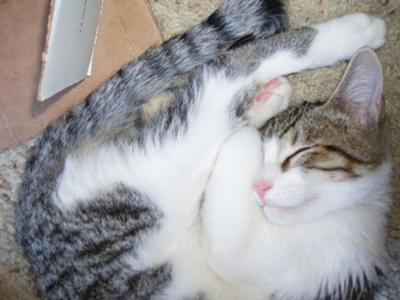 For years, I maintained the opinion that tabbies were "boring." I'd had several cats as a young girl, and they were a different and interesting breed every time.

A calico, a Russian blue, a Birman Siamese, a Bombay, to name a few. I never wanted to get a tabby, which I thought I could find anywhere.

However, after moving to my new apartment and starting to have "kitty withdrawal", I found myself heading to the pound with the intention of finding a yellow or orange cat.

I found such a cat, but due to an unfortunate case of worms, was forced to look at other cats. I felt a little dejected, having bonded with the cat before, and then I saw the cute little kitty that was to become my beloved pet.

He was a white and gray tabby. My boyfriend said he looked and sounded sad, as if he were singing the "Folsom Prison Blues." I agreed, and once I got a chance to hold him, I was hooked. We named him Johnny Cash, and he's been a great pet ever since. Now I feel foolish for being so judgmental about tabbies simply because of their coloring.

I've had enough cats at this point that I should know better; each cat has their own individual personality and little quirks that makes them enjoyable (and at times, annoying but cute!) I guess the moral of the story is to be open-minded about everything in life, even when it comes to choosing a pet! 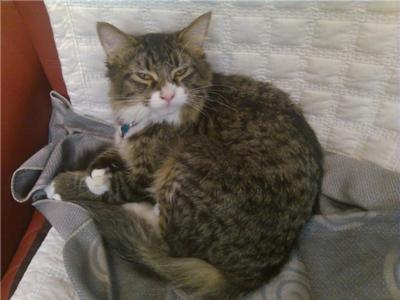 Why'd you wake me up?

By: Alida in Issaquah, WA

I cant love tabby cats enough. I have owned 4 tabby cats throughout my life and while they look like little tigers, they also have the best little personalities ever.

Sure, they aren't always lovey-dovey, but when they are, it makes it that much more adorable.

The 2 year old loves to play with the older, more deliberate one who just swats at him but secretly likes the attention. No matter how crazy they get during the day, they both turn into sweet little cuddlers at night, curling up at the foot of my bed for the full 8 hours. 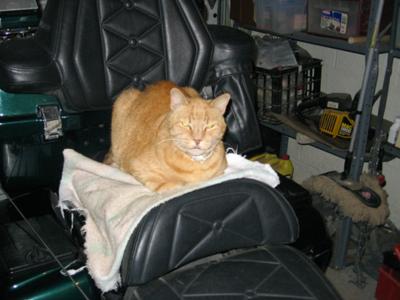 Tobby resting on a motorcycle

By: Amy in Alamogordo, NM, USA

My favorite type of cat is the orange tabby. Granted I have only owned two cats, both being tabbies; one orange and one the common mackerel.

My orange tabby, named Tobby, has a great personality! I got him from an animal shelter when he was two years old. At first, we had many problems adjusting to each other.

He didn't have any 'manners' inside the house and would make trouble every minute. He also did not take to my other tabby cat.

But, after about a month of trying to gain his trust he started to come around. Now, he is eight years old and still behaves like a kitten. He wakes me up every single morning by jumping into bed, curling up on my chest, and purring very loudly until I get up and feed him.

During the days he loves being outdoors, climbing trees, sleeping on the hood of my car, and attempting to catch birds. The coolest thing about Tobby though is he is not scared of anything!

He will go on car rides and calmly sit in the back seat, he enjoys taking baths, enjoys his nails being trimmed, and when I start up my motorcycle he jumps up onto the padded seat and curls up for a nap.

He now gets along with my other cat too. Sometimes I think she wishes Tobby still didn't like her because he will chase her around the house and yard relentlessly swatting at her tail and legs trying to get her to play with him. I still don't know why his original owners got rid of him, but I do know that he has a permanent home here with me and my other tabby.

A Tabby to Love

By: Michelle in Arizona

After having owned many cats in my lifetime, an orange tabby came to me and soon became my most favorite breed of cat.

In 2000 my mother was a new home builder when she discovered a kitten in an ash tray outside the office. A teeny tiny orange tabby left all alone.

Poor thing didn't even have his eyes open yet and was near death. My mother brought him home to me where I nursed him with a tiny dropper. I was sure he would be a runt his whole life, if he even made it to adulthood, as small as he was.

He surprised me though and grew into a big healthy cat. I named my new baby, Tiger. At first because he resembled one, but later became more fitting because he was as big as one. No one would ever have guessed he was that tiny thing left in an ash tray.

He was soon following me and my kids around everywhere we went. While never under foot he was always close to us. He watched everything we did and knew our routines better than we did. Tiger was so good with my children, never once did one receive a scratch. Tiger would crawl up in bed with the little ones and let them cuddle him like he was a teddy bear.

Tiger befriended our golden lab, a dog that before could not be bothered by the cats we owned. Now she not only would be found sleeping with Tiger, but grooming him as well.

The two played together, batting around balls and other toys.Tiger was my first short haired cat. I thought he wouldn't be as soft as my Maine Coon, but he was softer in a different way.

Not an airy softness, more of a squishy softness. Tiger also loved to talk to us and had the most perfect meow, as if he was singing.While Tiger is no longer with us he forever changed my thinking about cats.

If ever I adopt another cat, I want a tabby cats. They are so resilient and loving, so playful and caring. Seriously the best cat I ever owned.