One of the brightest of the Maine Coon cat colors is the Red Maine Coon Cat. Here is a close look at this beautiful and vibrant color.

Whether it’s a Red Tabby, lighter Red Silver Tabby, or even Red with White, this is such a striking color that it deserves it’s own page! 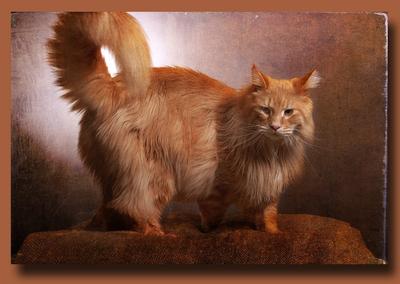 Many people also refer to it as an Orange Maine Coon cat. The color is indeed more orange or ginger than red, but the proper color is still called Red Tabby.

More unusually, a Maine Coon cat can also be a Solid Red, without any Tabby markings. If the color is very light, it’s called Cream.

When a Solid Red cat has a white undercoat that you can only see when you ruffle the fur, it will be a Red Smoke. 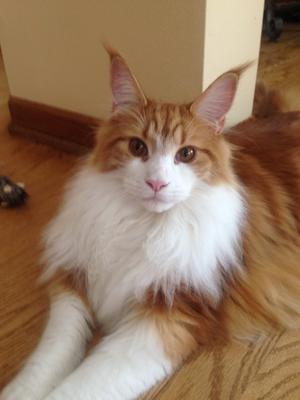 Most likely a Red Tabby Maine Coon will have gold or copper eyes. The “leather”, or nose and paw pads will be a shade of pink or red to match the coat.

Have you ever noticed that Red cats tend to be male? That’s because the gene determining color is tied to the X, or female chromosome.

So a female cat will have two X’s. Each X will have a color and she may also have a gene for dilution. So all those genes come into play to create the lovely color she turns out to be.

It's hard to describe the love between a 'Coonie' and their family. I know you understand! With such special family members often come special, breed-specific questions and concerns. Your loving fur-kid is very unique, both physically and in purrsonality.

Jude, having a look around

A male cat will have a Y chromosome, with no color tied to it. Then he has an X, which if it’s red, creates a handsome Red Maine Coon Cat!

A female would need to inherit red genes from both parents, which is more unusual.

Our cat Leo is a Red Silver (Cameo) Classic Tabby. Another term for his color is Classic Cameo. So his ground color is Cream, with Red markings. His nose is rose-colored. When he was a tiny kitten he was very pale, and as he grew his reddish markings came in. 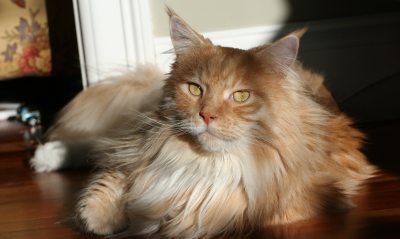 Leo in his prime 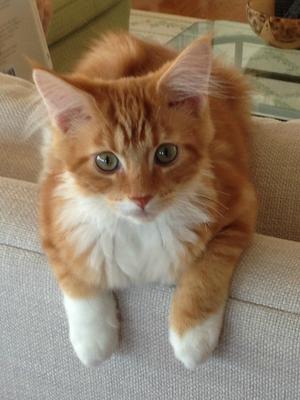 Jack found a place to hang out

Also, if a cat is Red with a White bib, stomach and/or feet, then the term "with White" will be added on to his official color.

The Classic Red Tabby Maine Coon has a ground color of Red, with markings of a darker, richer Red. The leather will be brick red. This is the Red Maine Coon Cat that makes you stop and say "Wow!"

Of course, all the Maine Coon cat colors are stunning. If only we could have one of each!