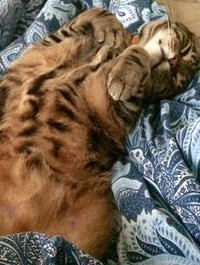 All kinds of cats deserve to be celebrated!

Do you have a favorite type of cat? Share here!

My male Blue Oriental Shorthair is the sweetest cat I have ever owned or known. I'm having a tough time now because I've been unable to find a job.

I just have to see his smiling face as he's cuddled as close to me as he can possible get, and I feel better.

He cries when I'm in a room he can't access, he waits patiently on the bath rug while I bathe, and he purrs the moment I pick him up.

I've also very rarely seen him eat! I put the cat food in the bowl, and he just follows me right back up the stairs.

Though he's very timid around other humans, he has a very warm heart. We adopted his "sister" Luci and he took her right in. My younger sister recently got a puppy, and my shy boy is the cat who loves to chase her around (and be chased by her)!

By: Ally in St. Louis

I have a British Red Shorthair cat, and he's the funniest. Every time my cellphone rings, he runs to it and starts meowing - telling me that I should come quickly and pick it up!

It's especially handy when I don't hear the cellphone ringing myself, so I can rely on him to warn me.

Also, he loves to play the "snake" game. When I imitate the motion of a snake with my hand on the floor, he gets all tense and wary, and if I get my hand close enough to him, he'll start attacking it and jumping around on all four paws. I guess it's a genetical thing, because he's a home cat and never saw any snakes, of course.

You'd think that since he's a British Shorthair cat breed, he'd be all lazy, calm and regal? No way. He loves jumping around on sofas, climbing up to the ceiling on the wardrobes and like, running wildly with the ball around the house.

What amazes me most, though, is the fact that he doesn't like a single of the store-bought toys I got him. But if he finds an old scrap of fabrics, a small pencil, empty bag - he can spend all day playing with those, completely ignoring all "cool" toys around him.

Sometimes he makes me wonder whether he really is a British Shorthair with a good genealogy...maybe he's just a stray? It doesn't really matter, though, I wouldn't give him up no matter what his breed is!

Blue Burmese, This cat's funnier than most people I've met

By: Stephanie in Pittsburgh

I convinced my brother to adopt a cat from someone I knew on facebook without ever even meeting the kitten.

A couple months later I moved in with him (my brother), as it turned out, and had a chance to meet him - the cat, that is - who had been named Minimog Malkinstein.

We soon figured out that he is a prime example of the Blue Burmese shorthair cat breed, with his gray nose and body, subtly striped and hardly spotted belly, and those silver paws. He's got the most amazing fur ever, especially in the light - it's hard to believe it's all natural and real.

Anyway, Minimog soon became quite attached to me, for whatever reason, even though I didn't know him when he was a kitten. It's like he knew I put my brother up to getting him! He follows me around everywhere, cries when I'm not home and when I cry, tries to knock the door down when I shower, and always cuddles in my lap as I do my homework.

He also does the funniest little thing where he'll get close to a wall or piece of furniture or the like, stand on his back legs, and just kind of paw the surface of whatever he's against with his front paws, but they slip so it looks like he's trying to run up the wall.

One time he went to give me bedtime kisses: he licked my face when I laid down to sleep, turned around, and walked (fell) right off my bed. I nearly died laughing at him.

I don't know what I'd do without him.