Everyone loves a Maine Coon polydactyl cat! They are so unique and endearing! 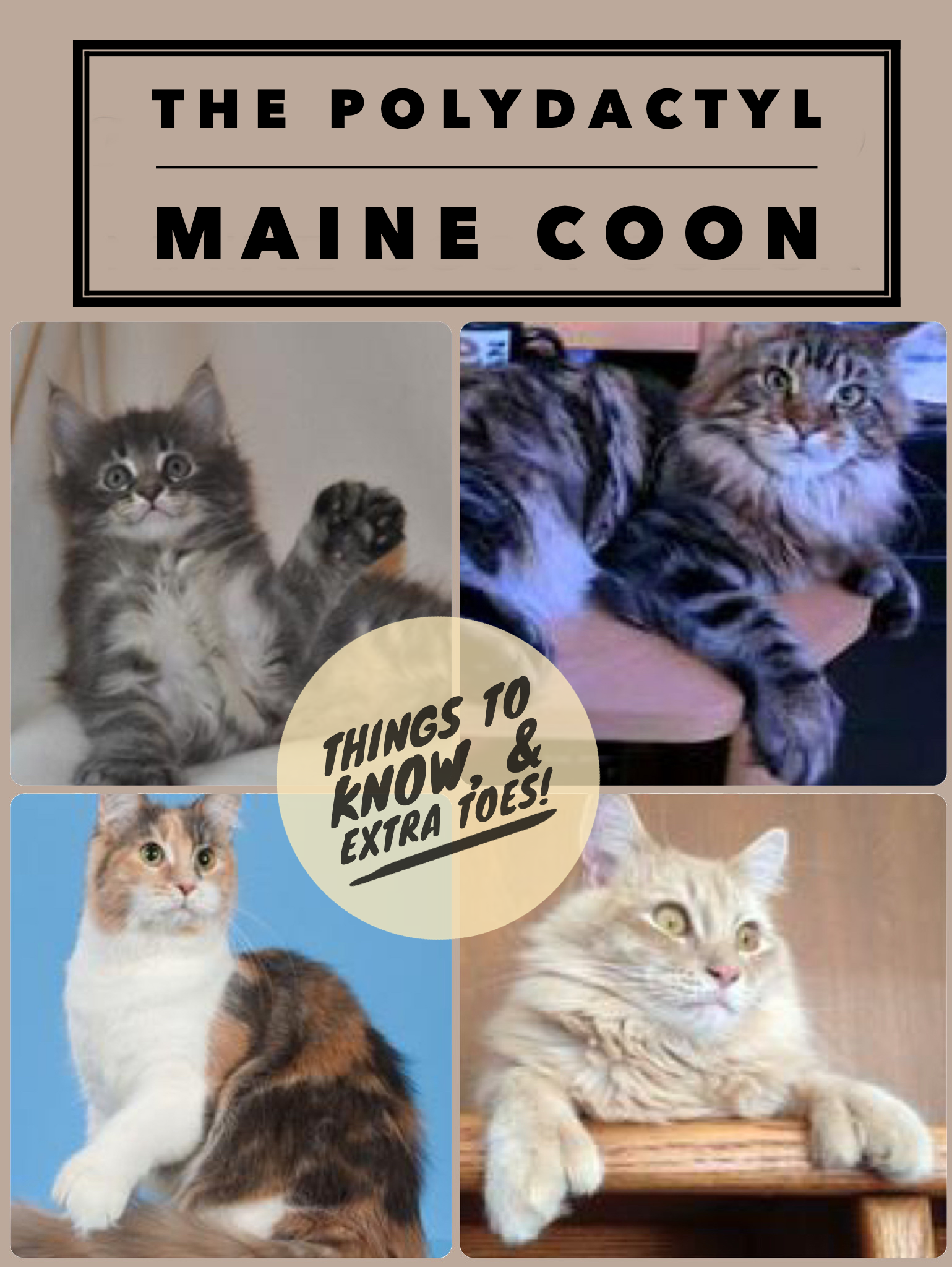 Did you know that early in the breed's development, original Maine Coon cats were often polydactyls?

Because of this, there is a common belief that there is still a connection between the polydactyl gene and this breed.

Let's talk about how rare they are, what their personalities are like, how expensive they are, and more!

These cats are so unique and enchanting!

If you are full of questions about these multi-toed beauties, you are not alone. Most people find them fascinating! 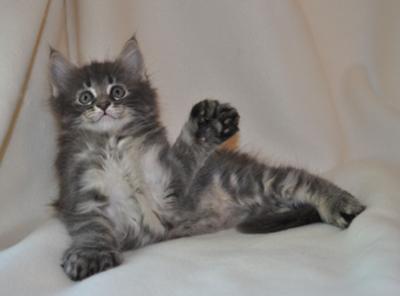 Mr. Buster is a Blue Classic Tabby Maine Coon polydactyl cat and he is poly on all four feet!

His owner, Linda, shares that he is sweet, laid back, funny and loving.

He loves his big sister Hazel, and loves to go for walks on his harness!

Just like non-poly Coonies! Having a few extra toes doesn't change their personality, or make them a whole new breed or style of cat with it's one personality traits.

The great news about that is that by going to a reputable breeder, you know exactly what kind of personality your kitten will have.

You can use this same train of thought to answer a lot of questions you may have about these endearing kitties:

"Are polydactyl cats more affectionate?"
Their owners may think so, and it may even seem so! But that is purely anecdotal evidence. All Coonies can be expected to be affectionate. It's how they're bred!

"How big does a polydactyl Maine Coon get?"
Males may be 13-18 pounds, and females range around 8-12 pounds. Some can be much more, and on average that is substantially more than your typical house cat.

Again, this is the same answer as for all Coonies! Visit our page on Big Maine Coon Cats for more.

What Is A Maine Coon Polydactyl Cat?

Breaking down the word polydactyl, poly means "many" and the "dactyl" part refers to the toes.

So, they are "many-toed" cats - cats with more than the usual number of toes! It is a genetically inherited condition.

"What is the normal number of toes?"

Usually, a cat has eighteen toes. Five on each front foot and four on each rear one. A cat with the polydactyl trait can have up to seven toes per foot.

A cat or kitten can be poly on one, two, three, or four feet. The number of extra toes can vary.

They can have one or more extra toe on a foot, in various combinations. Although usually both front paws match in number, as would both hind paws.

Tigger is a Handsome Poly Boy

Most often, it is seen on just the front feet. It's considered very uncommon to see a cat with just the back paws affected, or all four feet.

A cat named Tiger from Canada holds the Guinness World Record for the most toes – twenty-seven!

Polydactyly, or the condition of being polydactyl, is found more often on the East Coast of the United States and Canada, including here in New England, as well as South West England and Wales.

Of course, they can be found in many other parts of the world, as well!

If you have a Maine Coon, you know how unique and different they are. You know you have a special cat! And if you're new to the breed, you are probably wondering what their unique needs are.

Since we're on the topic of health care for Maine Coons, I want to mention our E-book, The Care and Keeping of Your Maine Coon Cat. It's full of info. Check it out, and review the table of contents to see for yourself!

When I was a teenager I met my future husband, and his family had a beloved cat named Alex.

Alex, a domestic short hair, had extra toes on his front feet – they were huge!

The family told me he was double-pawed, and this was the only term I knew for a while. Well, he didn't actually have double paws or double the number of toes. I think he had two extra toes on each front foot.

It's a common and endearing term, but an incorrect one, because there actually is a condition called feline radial hypoplasia.

This condition creates overly large feet that look more like a patty because the toes are not separated as usual.

These cats should not be bred together, because the genetic mutation can become more severe and debilitating in future generations.

The famous American writer Ernest Hemingway was given a white polydactyl cat by a ship captain, and her name was Snow White.

He is well-known for his affinity for these endearing animals, and when he died his house became a home for his cats.

It is said that about sixty cats, some being descendants of Snow White, still reside at his former home in Key West (well cared-for, of course) and many of these have the familiar extra toes.

Is Polydactylism A Sign Of Being A Maine Coon? 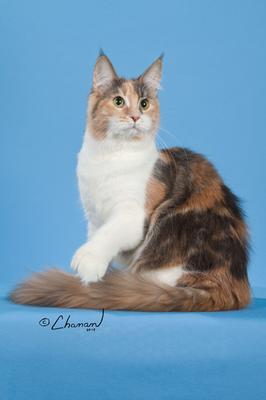 No, the only way for a cat to surely be a Maine Coon is for it to have been born to two pedigreed Maine Coon parents in the care of a breeder.

Polydactyl kittens can be found in any and all cat breeds. There are many Domestic Short Haired cats (and this is a style, not a breed) who have additional toes.

However, there is a separate breed called the American Polydactyl.

It is bred as a specific breed, with it's own breed traits and characteristics – including extra toes.

So, what is the connection between the Maine Coon breed and polydactylism?

Well, early on in the discovery, development, and recognition of this breed, many of these cats were many-toed. Why?

One favorite theory is that they were the descendants of long-haired cats brought over from Europe on sailing vessels.

Sailors considered having cats on board good luck. Since polydactyl cats are considered good luck they were known to be favored on ships.

Those big paws made them excellent mousers and hunters on the high seas, and may have helped them hunt and survive once they disembarked from their long journeys and settled in the Northeast. 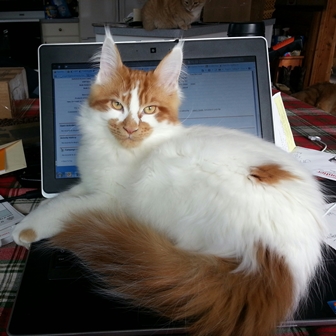 He loves to play and trill at the same time.

He loves to play with his older brothers and sister but they don't seem to understand how he can pick up toys using his thumbs and they can't?"

Are Most Maine Coons Polydactyl?

Good question! This trait is not allowed in "show cats" so it is not common to see nowadays. Many breeders participate in showing their cats.

That's a big part of what the passion for cat breeding is all about!

It is unfortunate that a magnificent feline would be denied the chance to become a champion just because this trait is deemed a "fault."

Because of this, there are groups and organizations with an eye to bringing polydactyl cats back into the show ring.

But if you love polydactyl Maine Coons, take heart!

There are breeders who specialize in breeding polydactyl Maine Coon cats and kittens. These are fully registered, pedigreed, purebred cats. Every bit a Maine Coon – plus some extra (toes, that is)!

It's important to note that all polydactyl Maine Coon Cats are purebred, full Maine Coons in every way, including pedigree.

He is a poly with six toes, a wonderful personality, and really likes to make use of his thumb!

"How rare is it for a Maine Coon to be a polydactyl?"
It's relatively uncommon at this point, due to it having been bred out. And finding a poly on all four feet is a special find indeed!

But they are not that rare. With a little searching, one can easily find a breeder that may have upcoming or planned litters of possible polys.

The hard part will be the waiting!

"How much is a polydactyl Maine Coon?"
The cost of any Maine Coon will depend on a few factors, such as pedigree, location, unusual features or coloring, and more.

Since polys are harder to come by, expect them to cost more than their non-poly counterparts! Costs can be very variable, so it's best to ask the breeder directly.

You can visit our page on the cost of Maine Coons for more info on the topic.

"Are there any health issues Maine Coon polydactyl cat owners should know about?"

None! They are wonderful, healthy cats with extra digits. If you clip your cat's claws (or have them clipped), just plan on clipping some extra claws. That should be the only special care they need!

They might be excellent mouse hunters and may even have better balance than other domestic cats.

Are they all better mousers? Not necessarily! Cats will be cats, and they each have their own distinct personality. Although most cats love to chase mice, there are those that don't.

My Leo could catch a mouse, but he'd always set it back down and it would run off. Once, he set it down in his food dish, to save it for later, as he did with his toys! The mouse was very grateful, and we found it hilarious!

With that said, owners of polydactyl cats will notice that the extra size on those paws is an advantage for mousing, and for balance as well.

I have heard some say that it also helps them walk on snow better than their non poly counterparts, as in the ability to walk across it without falling through - like when wearing snow shoes.

As a native Mainer very familiar with snow, I think I'd need to see this to believe it!

So there you have it, the Maine Coon polydactyl cat is a healthy, hearty, and endearing cat! You want one, now, right?