Have you ever noticed the traits that large domestic cat breeds have in common?

The bigger breeds are known for their silly antics, loyalty, dog-like nature and intelligence, not to mention that they are fabulous family pets!

There are so many different cat breeds to choose from! Maine Coons are not the only big cats around.

It's quite a spectacle to see such a big cat enter the room! The following six cat breeds are our picks for the large cat breeds.

There are a few personality traits that these breeds hold in common.

They are known for being loyal, playful, dog-like in nature, and very loving family members. Some of them are very popular cat breeds, too! 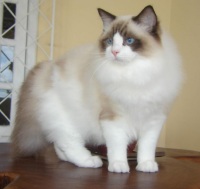 The Ragdoll, with its large blue eyes and gentle personality is also rather large. Males can be 15-20 pounds, and females 10-15 pounds.

The Ragdoll breed came about in the 1960's and has become quite popular, due to it's endearing characteristics. 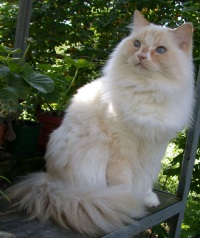 The Ragamuffin can be any color. It is a very new breed, which is descended from the Ragdoll breed. It has similar qualities in size and temperament, being known for a very sweet and loving personality.

The fur is thick and medium, resembling the softness of a rabbit.

The affectionate and intelliegent American Bobtail is of similar size. It is known for it's dog-like personality and intelligent expression.

These cats may be short haired or have a thick medium-long coat. The tail is usually between 1-4 inches long. 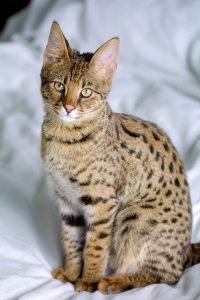 The Savannah Cat is a very new hybrid cat, a cross between an African Serval and a domestic house cat. It has striking markings, a "wild" or natural appearance, and stands tall. They weigh around 10-15 pounds, with an occasional male weighing around 20 pounds.

Speaking of the Serval, it is a wild cat that is sometimes domesticated. The Serval is usually mentioned in discussion about large domestic cat breeds. In general, it is not considered a domestic cat, though.

The Chausie is another hybrid, this time a cross between a Jungle Cat and a domestic house cat. It is very exotic in appearance, sleek and strong. They are known for being agile, able to jump quite high. The Chausie is also large in size.

Both the Savannah and the Chausie are new hybrid cats. As such, they may not be legal everywhere. The Savannah, for example, is not allowed to enter Australia.

The concern is that it will breed with the local feral cats, creating a much larger and stronger hunter. This would endanger some of the local species. So it's a good idea to check local regulations before choosing any exotic cat.

Looking for large domestic cat breeds? Obviously we have to include the Maine Coon Cat! They are famous for their size.

A male usually weighs in between 13-18 pounds or (sometimes substantially) more, and a female is usually between 9-12 pounds. 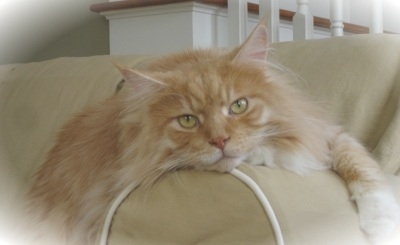 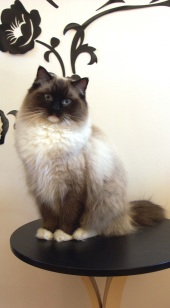 So, they are not the massive cats of legend, but compared to an average house cat, the size difference is noticeable.

Want to know more about this breed and their size? Visit this page on big Maine Coons, kings of the large domestic cat breeds!

Future owners of any of these large domestic cat breeds should be prepared for a "big personality" to match the size of the cat.

These cats need space to run and play, and even big litter boxes! They are known as being very playful and engaging family members.