The Maine Coon history leaves us guessing, unlike most cat breeds who have clear origins. It's a fun topic to contemplate! 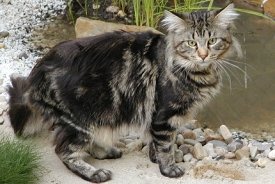 Looking upon a big Maine Coon Cat, you can easily see that this is no ordinary domestic cat!

We have legends, myths, and educated guesses to help us answer the question, "Where did those Maine Coon characteristics come from?"

No one really knows. That's part of the mystery. When they first showed up in the earliest cat shows, all that was known was that they were from Maine.

As a result, they were known in those days as a "Maine Cat." But more on that later. First lets talk about their mysterious history.

North America doesn't have a native house cat, which just developed in the wild. Although there are bobcats, lynx and so forth in the wild, a domestic cat has to have come from somewhere.

Where did they come from? Lets start with the impossible, and work our way to the probable Maine Coon history.

Believe it or not, some people actually thought they could possibly be a cross between a house cat and a raccoon. This is a physical impossibility. They are two entirely different species! Modern science tells us this is just can't happen. Enough said!

Another theory is that a house cat mated with a wild lynx or bobcat. This is not impossible, though most would agree it is improbable. But, once you get a good look at a big Maine Coon cat, it could make you wonder!

The next story about Maine Coon history is more enticing. I thought it was quite fascinating when I first heard about it. Before Marie Antoinette met her untimely end, she was making plans to escape to America.

There was a sea captain who was helping to fill his ship with her belongings. This much is true and documented. It was also noted that she was a fan of small furry animals.

So, with a little leap of faith, we might guess that Marie Antoinette had Persian and Angora pet cats. They would have been on board with the captain who returned (without her, of course!) to America. These cats would have bred with the common shorthair variety, creating the new breed. 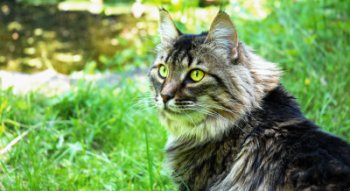 Another story involves a captain who may or may not have existed, by the name of Captain Coon. There is no record of him. As the story goes, he was very fond of longhaired cats, of which he had many.

When he went ashore, some of his cats would be left behind. Then longhaired kittens would show up in local litters. The comment would be made "there is one of Coon's cats". Who knows?

Lastly, and most plausibly, is that the Maine Coon characteristics simply evolved out of necessity. Northern New England in its early days was a very busy sea port. Seamen from all over the world docked regularly.

They were well known for having pet cats on board for company, and to keep the rodent population under control.

So, these cats from all over the world would have been left behind. Longhaired cats, especially the Norwegian Forest Cat were popular in those days. They would soon have developed the characteristics needed for survival.

So now, when someone asks you, "Where did the Maine Coon come from?", you can answer confidently, "I don't know!"

The mysterious Maine Coon history makes them all that much more alluring!

Adding You Your Maine Coon Family?

<< The Care & Keeping Of Your Maine Coon is the ultimate guide to all the breed-specific needs of your Coonie. This unique breed has unique needs! A must-have.