Here are our December 2015 Maybe-Maine Coons and mixes! Do you think these kitties are Maine Coons?

By: Vicki in Nevada 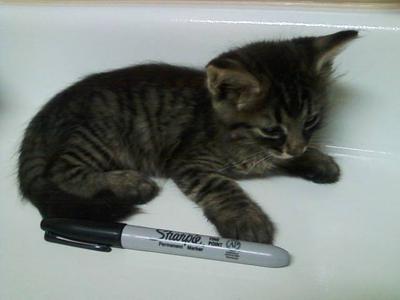 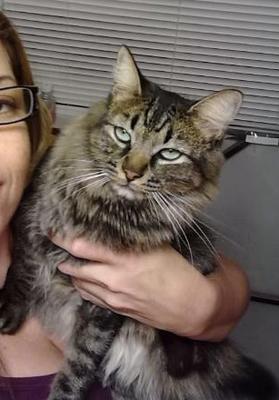 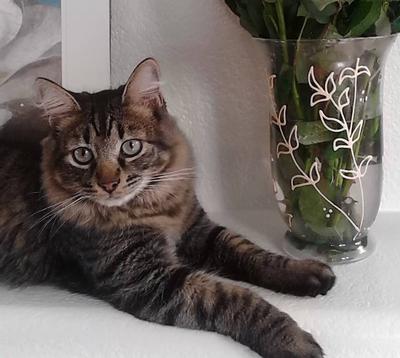 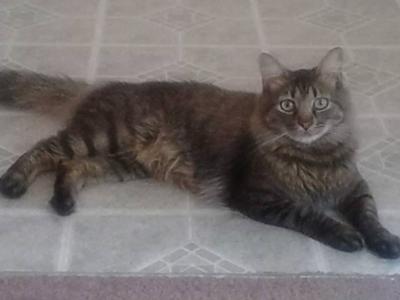 He was found at 3 weeks in a truck engine. He is now 1.5yrs. Everyone tells me he is a Maine Coon. He certainly looks like he is at least a mix. He does have some features, but I'm not sure???

By: Matthew Stephens in Felton,Pennsylvania,USA 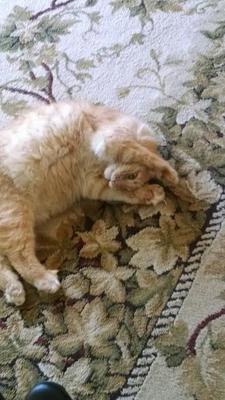 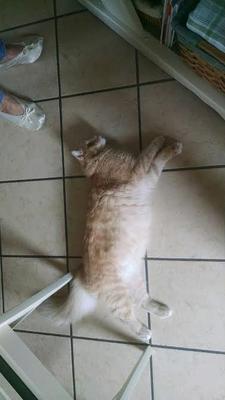 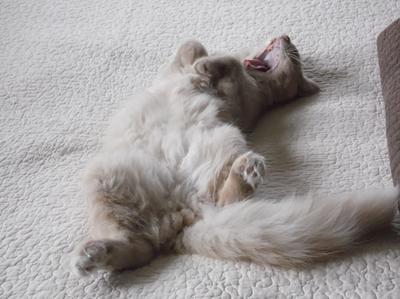 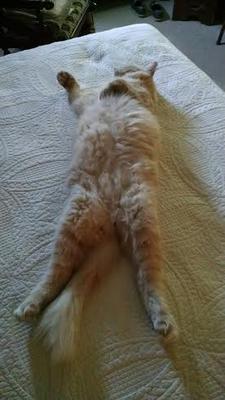 I work construction and one day last year the couple I was working for said someone left this cat in the field and asked me if I would take him in.

I said sure; she already had named him so I kept it Dusty. He is defiantly blonde and young still I am guessing he is Maine Coon.

He had the hair off the ears but the dumb groomer shaved them off. He is the most loveable cat I have everseen and very playful and has one heck of an attitude if he dosent get his way...MATT 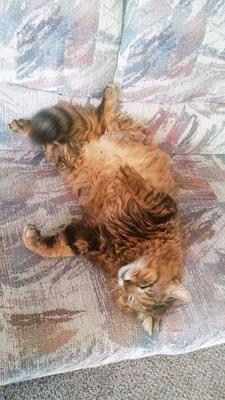 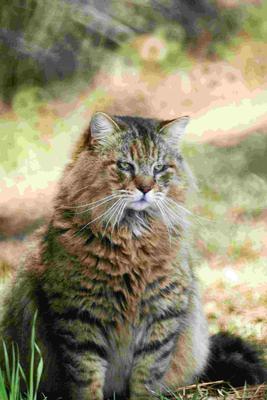 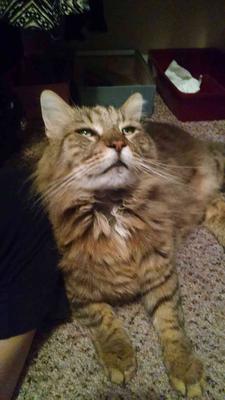 We found Buddy. He's likely a mix. He does have many of the personality traits described and most of the physical markers as well. And he weighs 16.5 pounds...

He was found living in the woods behind a hotel. The person who found him had him nutered but couldn't take him in.

When I got him home and cleaned up (thanks to a local vet) he was not in the best health. His fur was thin and course, he had a bad case of sneezes and his eyes were infected. I don't know how long he'd been in the woods and the vet couldn't tell how old he was.

He had once been someone's pampered house pet. He was already litter box trained and has never had an "accident" since coming home with me.

We medicated and babied him. Now, he's healthy again and bright eyed and behaves as if he owns the house and just allows the humans to live here because he likes us.

He has tiny tufts at the tops of his ears. He has tufts of fur between his toes, His paws cover half the palm of my hand. His wiskers are longer than my longest finger. His tail is long, a nearly 2" in diameter bush and "ringed" like a racoon. His coat is thick and silky. He has a bit of a lion's mane around his face. His eyes are big, slightly tilted and green. He has the "M" on his forehead.

His purr could rival Johnson or Evenrude. He voice ranges from a soft mew, to a roaring howl depending on his mood. His curiosity is going to surely cost him several of those 9 lives he's supposed to have as a cat. He ponces on and plays with things only he can see. He jumps up on everything...No furniture is to high for his Royal Highness.

We adore our Buddy what ever his family tree! 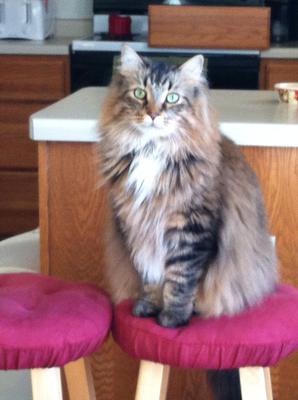 Snuggles came to our family back in 2010 as a stray kitten. Very gentle personality and very loving.

He is about 21 pounds, big paws, muscular, long and has about three layers of fur and a full mane now that he is 5 years old.

Loves to talk to the birds and voices his opinions when he wants food. Loves the bed and blankets. He can be skittish when it comes to loud people. We have never had such an easy going cat love him very much.

I'm sure he is a mix however may have some traits of a Maine Coon. His best friend is Oliver.

By: Danielle in Franklin, Wisconsin 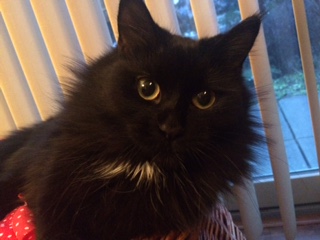 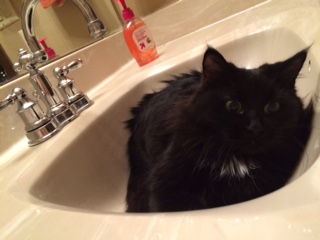 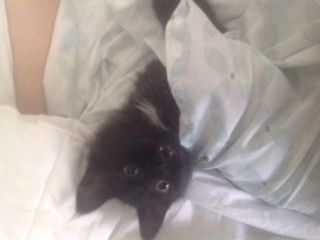 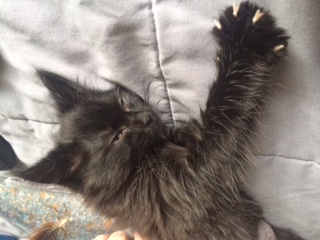 Black Betty is a high maintenance gal who loves to spend mornings staring at herself in the mirror or relaxing in the bathroom sink.

In fact I think the bathroom is her favorite room because no matter where she might be in the house, she can always hear my husband or I heading that way and follows ! It's a MUST for her to get in the tub or shower as soon as one of us gets out.

She's extremely vocal making the strangest noises I've ever heard ! I've had cats my entire life and in addition to Betty we do have a very handsome Lynx point snowshoe Siamese who loves to talk. Betty doesn't just talk- she screams, chatters, yells, yeah, I don't even know what to say about all of that ! It's nothing like I've heard before.

She does pick on my Siamese boy a bit, I think it's part play and part jealousy/ dominance. He's much older than her and she is now equal size. She is supposedly 7 months and weighs about 6.6lbs. I rescued her from domestic control who obviously didn't have much info.

I've never had a cat like this in my life ! Sometimes we don't even know what to do and it's like we are "child proofing " our home left and right because of Betty (which we actually find funny, so please don't think we are giving up ! That would not be an option ! :)

About a month ago I woke up to find potatoes all over my house from a very active black cat ! Yes, I said potatoes ! We do not think she is a purebred, but do believe based on size, looks and behaviors that she may be a mix.

By: Ashley in Rhode Island 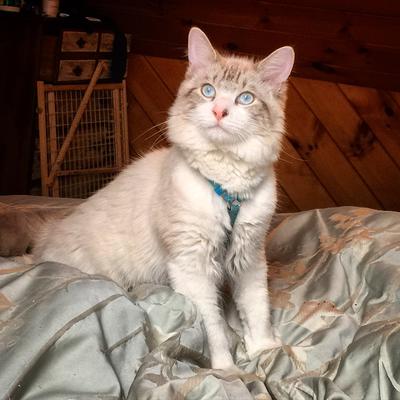 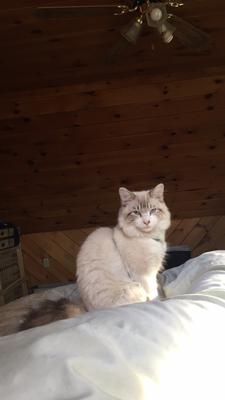 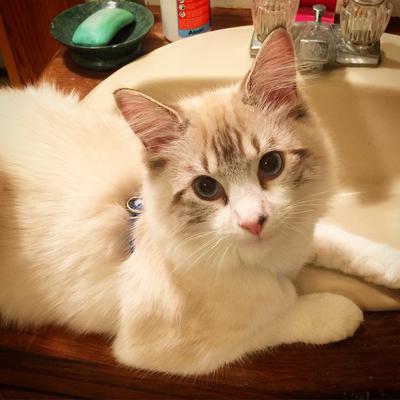 Always near the sink 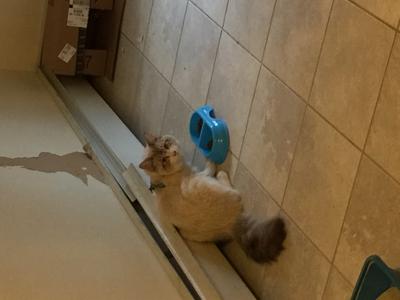 Yes he tore apart the wall too

Oliver certainly has a personality. He is always under my feet or in my face, on the counters etc. He follows me around constantly.

He is super loveable but also really playful and will lick you one second and attack you the next. He is always biting things...papers and toys, you name it. He also plays with my 70 pound German shepherd constantly!

He has fluff in his ears and between his toes. I know he is part Siamese because his moms mom was Siamese but we have no clue who his dad is so its possible he is Maine Coon.

He also does a lot of quirky things when eating and drinking that I have read are Maine coon characteristics as well. Like, he will paw at the water and around the bowl before drinking it.

He isn't afraid of water and often sticks his paws on the shower. I can put his paws in the water fine too. He is just shy of 8 months old and weighs around 9 lbs. :)

Leoniadas (Leo) - Is our little guy a Maine Coon or part MC?

By: Rhonda in Rolling Prairie, IN 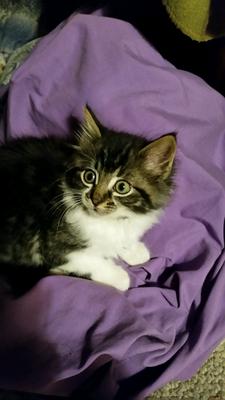 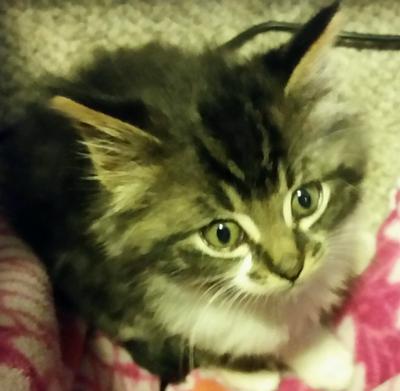 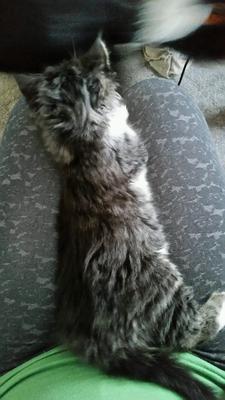 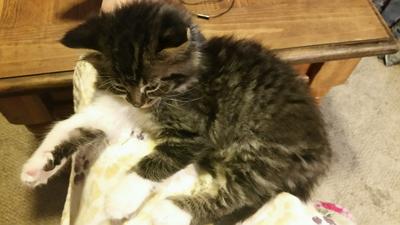 My son claims he found this adorable little kitten in our driveway. We live in a rural area off a highway. It's a very busy road surrounded by farmland. We think he was about 5 weeks old when he was found.

The eyes on this kitten and his fur is so beautiful.

He is VERY playful and meows very loudly when he wants to be picked up to eat (We keep it on the counter so the dog won't eat it).

He loves to run to the door to greet me when I come home (just like the dog does). He is VERY active and loves to eat. At times, when sleepy, he will snuggle by me or sleep on me. He prefers to sleep by my neck or on my chest.

He has a lot of the traits listed. He looks like a Main Coon and acts like one. He has those wonderful eyes the tuft of hair at the ears. I would really like to know if you think he is full or part Maine Coon. 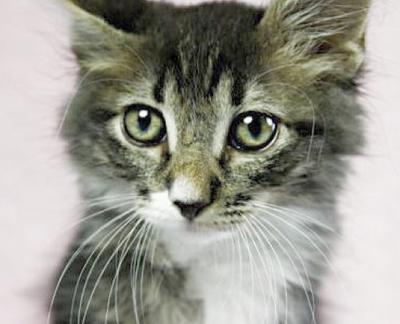 By: Coco in California

Top of December 2015 Mixes and Maybes