By: Robyn in Canada 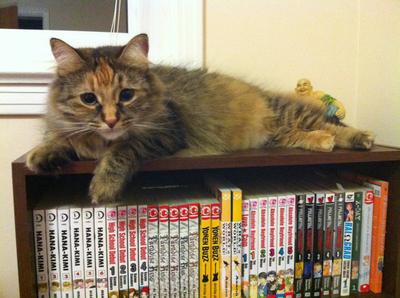 Penelope is my first cat. My mother's neighbor, a good friend of ours, had found a stray momma cat under her back porch.

I remember Momma cat having a very dark brown/black coloring, but I don't remember the shape of her face. She had two kittens though, Penelope and her sister, Ruby. (The neighbor adopted Ruby!)

We waited a bit longer than normal to take the kittens in, so I did not have Penelope when she was very tiny, I think she was about 4-6 months old when I took her in? I'm bad with those kinds of details.

The main reason was because the neighbor was going to try and take the Momma to a place where she could be fixed, and then re-released into the wild, but Momma dissapeared before she could do so.

Anyhow, Penelope is four now! She is the sweetest cat ever, and I feel that sometimes her personality matches mine. She will follow me around the house. If I leave one room, she'll have to make sure she's in the next with me.

She'll greet me at the door when I come home and when I get up in the morning. She'll meow at me then, and talk to me. She likes to do this thing where she'll place her front paws on your knee and stretch up to get petted, and comes to me when I call her name. (Although I call her Kittens all the time, that's technically the name she knows.)

She doesn't like being picked up at all, and will come to me when called or on her own time for pets. When petted, she won't sit still! She rubs her head all over my hand.

Also I can't tell if she likes water. I may have frightened her the one time she got fleas from my room mate's cat. I made the mistake of turning on the water for the tub while she was in the bathroom, and it was probably too loud and rumbly for her!

But she has taken to playing with the water in her dish and spilling it all over the place no matter what I try to do, so maybe?

She's very playful! Such a frisky hunter. She's not good at playing fetch since she doesn't take the toy back, but she'll run and slide down the hallway to get it. When she plays she'll thump around the house, swatting her mice around.

She does this crazy thing where she'll throw her toy up in the air and catch it. Sometimes she'll just lie there with a toy in her front paws, and kick at it with her back feet. She also seems to chirp at the laser pointer, and loves to play with bugs.

She still seems to have her feral side in her at times. She trusts me the most, and a select few of my friends. She still inches around parts of the house (I've moved back to Moms for a while), and is unsure about my brother.

If a stranger or a child visits, you wouldn't even know I have a cat. She hunkers down under my bed, and will sometimes hiss when she feels threatened or cornered.

Her coloring and soft fur is my favorite! Much lighter than her sisters. There's light brown, dark brown, a bit of yellow/white on her belly, and an orange splotch on her forehead. She has whiskery ears, and bright yellow eyes.

When I took her to the vet for the first time they said she was a "gray tabby". A friend of mine said she was a maine coon. Before I knew about Maine Coons, someone I knew who was training to become a vet told me that my cat was fat!

She seemed to change her mind a bit once she picked Penelope up and realized she was mostly fur, but people keep saying she is fat! I don't think she has a weight problem though. :(

I'm really sorry that this is such a long post! If you can't tell, I love my cat and could probably go on and on about her. I really want to know if she might be pure-bred, or a mix. And if she is a mix, what other breed might be in her?

Thanks for reading!!!
Robyn