Not A Maine Coon

The title is the name of a deceased kitty. (editors note: see the submission in question < a href="https://www.maine-coon-cat-nation.com/february2015.html#leo">here) The owners claimed he was a "Bobcat mix". Genetically speaking, no! Different genus Lynx Rufus, Maine Coons are Felis Catis.

Sorry to call BS on this but I had registered Coons and anything not registered as Maine Coon is not a Maine Coon. (This is from my breeder.)

If you want a nice kitty, pretty much any kitty will be nice if you train it so.

But a Maine Coon is bred to be a Maine Coon, that is why you go to a breeder and spend the enormous amount of money they ask for kittens.

I am not being nasty I just want the site to be truthful to the breed.
Respectfully,
Glen Rudesill

Reply:
Very interesting, Glen. Some readers bring this up from time to time - the subject of our inclusion here. As the site states, it is an actual breed (not merely a color/style such as calico or domestic longhair), other breeds for example are Himalayan, Siamese, or Persian.

The only way to know for sure that a stray, gifted or rescued kitty is a Maine Coon Cat is to look at their pedigree (paperwork provided by the breeder). But we really only state this for folks who have never heard of a Maine Coon and wonder what it is - a breed or a style? Certainly not to leave anyone out. 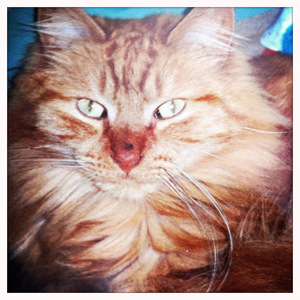 We also list a few circumstances where a Maine Coon may change homes, and papers become lost - for example when an owner passes away.

My love of Maine Coons started with my domestic medium-haired cat, Clyde. He was wonderful, and displayed every personality trait of a Maine Coon.

As a teenager, I wondered if he "might have some Maine Coon in him" - but I knew, logically, he didn't! I was just very lucky.

Clyde was my Honorary Maine Coon. He inspired me to get to know the breed and contact a breeder when the time came, years later. I wanted to know my new additions would have that wonderful temperament, and be a lot like Clyde. They do, of course, and we are Maine Coon fans for life! And I have Clyde to thank for that.

Of course, with such an active community of folks visiting and commenting, every individual with their own opinion or story, there will be quite a variety of photos, stories, mixes, opinions, and cats shared here.

There are stunning purebreds, - and also mixes, lookalikes, and mysteries. All are equally beloved and included at Maine Coon Cat Nation, even the "Honorary" ones.

*** As a side note, the original commenter stated that Deputy Dawg (a deceased kitty and not the kitty in their submission, but predecessor to him), had been a Silver Mackerel Tabby/Bobcat mix. I believe they were referring to the breed American Bobtail, not a wild bobcat (Lynx rufus), and not claiming Deputy Dawg was Maine Coon.

Mixes, Purebreds & Rescues - What Is Your Experience?:

Do Maine Coons have to have "fluffy" tails? I have a baby and his tail is extremely long, but not real fluffy. All comments are welcome.

not a Maincoon
by: Anonymous

I found him offensive for those of us who are new and trying to learn about Maincoon and Maincoon mixes.

He was a bit of a downer and I would ask him not TO comment on anything it he doesn't agree and keep his negativity to himself. I am very blessed that you have this site or I wouldn't be learning everything that l am.

I have this bookmarked and pinned. I just adopted a rescued kitten that appears to be mostly Maincoon (I doubt full because she's feral) but I am going to raise her as though she was full blooded.

She has sooo much fur to be groomed and I want to do it right.,along with everything else that pertains to taking care of my kitten.

Glen, thank you for your opinion, it was truly crisp & refreshing (like a nun with a big stick)

Though you use a disclaimer to refute the fact that your comment is nasty, it is a bit ineffective.

People do not need to be reprimanded for adding their stories or opinions on a site such as this. If imperfection and adherence to strict AKC laws are what you're looking for you should seek out only AKC sites, then you wouldn't have to use your energy "schooling" others in what their Kitty is or is not.

I applaud the LADY who runs this wonderful page for her very nice & diplomatic comment about your lesson!! I would've blown your hair back! :)