This May, flowers are blossoming and so is our latest album of Maybe-Maine Coon Cats!

Maybe-Maine Coon Cats For May: 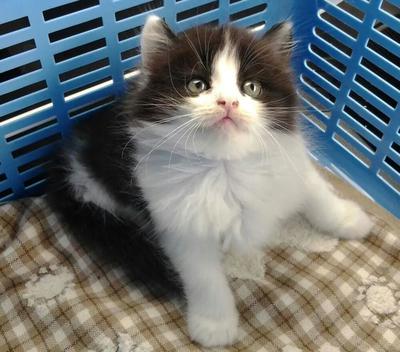 The day I got him. Couldn't get far enough away 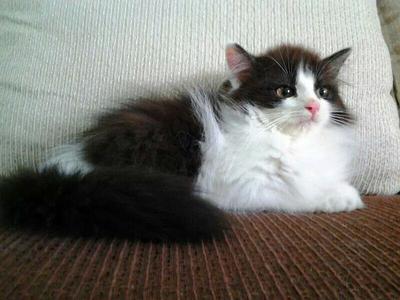 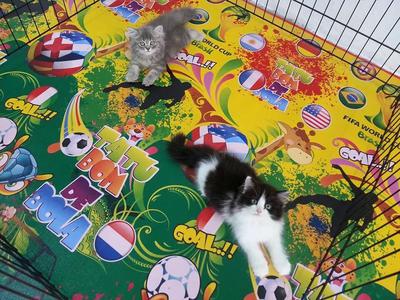 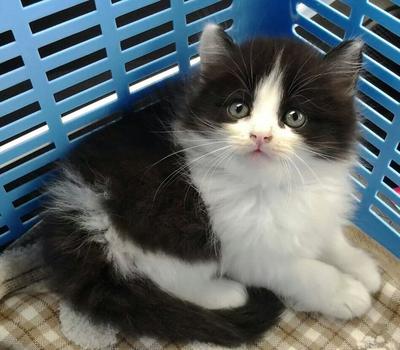 Looking out the window

Purchased from a pet shop

By: Geoff McIntyre in Syracuse, NY 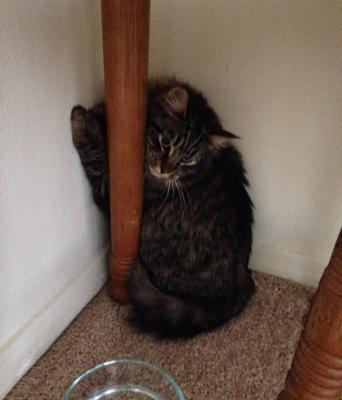 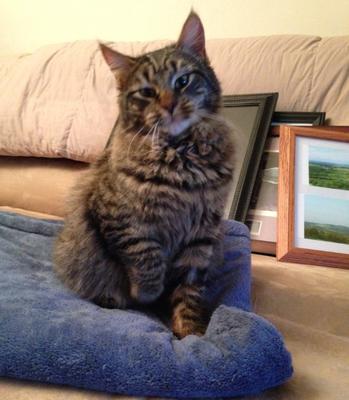 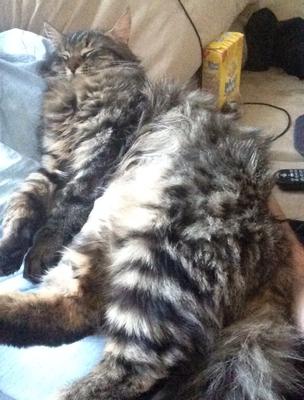 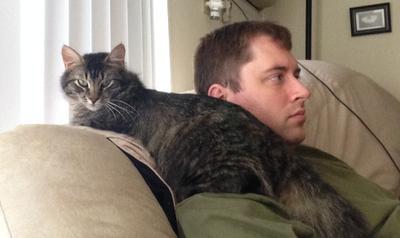 He's 2 years old and very affecionate and playful with me. Constantly talking, purring and licking me.

I don't have too many people over but when I do he always hides. If my guests can get to him he enjoys them pet him as long as he's in his safe spot.

The physical traits seem to be there according to this page. The furry toes, pointy ears, body shape. He also has a curly tuft of fur behind the base of each ear.

He bites me when I pet him sometimes which is new to me. Not hard or violent, just a gentle bite down and then lets me continue petting.

By: Keona in Pennsylvania

By: Sarah in Western Iowa 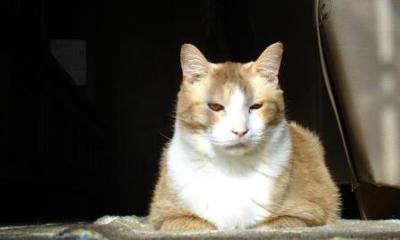 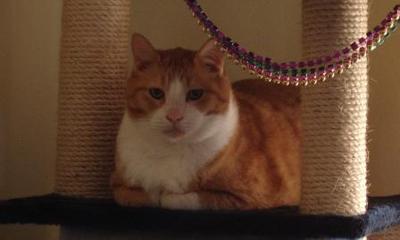 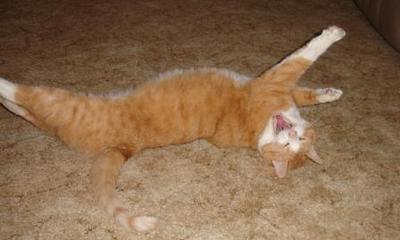 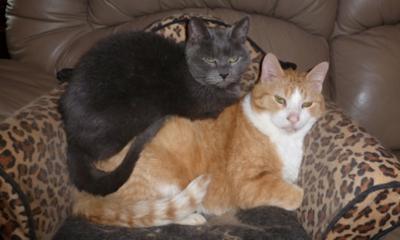 Kit Kat is the most talkative cat I have ever owned! I got him as a kitten 13 years ago and he talks to me every day. I always thought he was just big for a tabby until someone said he is probably Maine Coon. He weighs 18 pounds, is 13 inches tall (paw to shoulder) and 23 inches long, head to butt (tail not included)

He has quite the personality. He can give you glances that tell you exactly what he thinks and he has quite the vocal tones. He will say hello to us alot and will meow constantly if there is a conversation going on and he is being ignored.

If you are in the room with him, he has to be next to you. If he does hang out on the floor he mostly lays on his back with his paws up in the air.

By: Kim in Durham NC 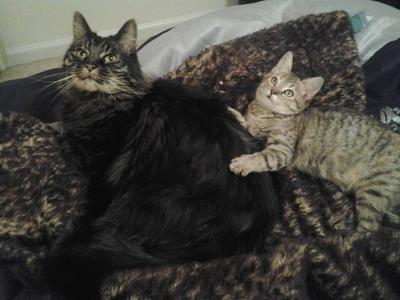 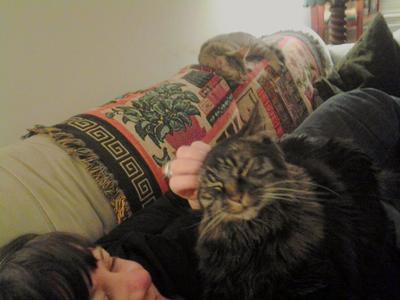 Wick is almost 8 now, a dainty twenty-pounder with snowshoe paws, glorious whiskers and a triple-thick coat. I've suspected he has at least some Maine Coon in his genetics because of his size and looks as well as his disposition.

His ear tufts are less marked as an adult, but as a baby (he was rescued by highway at about 6 weeks old) he had HUGE white ear fluff, and longer black ear-tip tufts than now as an adult. His tail and "puffy pants" are exceptionally luxurious :)

He's fetched (untrained) from the time he was a baby; and he loves, loves, loves water. Playing in his bowl, drinking & playing in the bath-tub. Water gets all over his surface coat, but he could care less LOL! (plus, it almost never sinks through to the skin because his undercoats are SO dense).

He loves to combine his favorite things (toys + water), putting his latest favorite toys (paper wad, ribbon, knitted mouse -- ew, soggy!) INTO his waterbowl for me to find.

He's an absolute love-bug with me; if I'm sitting or lying down, he is ON my hip like a dog. He responds to hand signals to come (very little training) when called in addition to verbal signals. He is very gregarious and silly when I'm present and with a few select people he knows well; he is "polite" to guests in the house, but they clearly have to have my approval before he wants to approach them.

It's earned him the nickname "Chicken of the Sea" with a few friends who know how shy he is with strangers when he is REALLY so people-oriented once he knows you.

He bonds very easily with other cats -- in fact, he is the most "needy" cat I've ever owned. When my older cat (a Persian mix) died, he grieved and grieved; he has two new buddies now -- one is a bit more stand-offish, but the latest is a kitten to whom he has become a very patient "mama" (his goofy, gentle, sweet disposition is absolutely remarkable.) 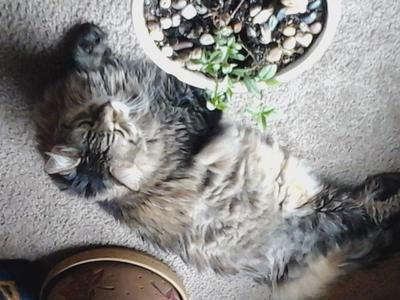 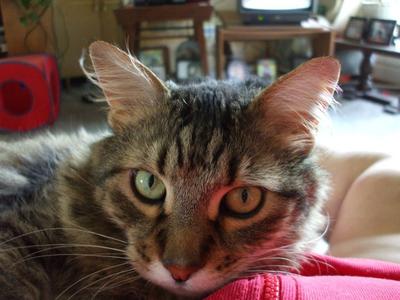 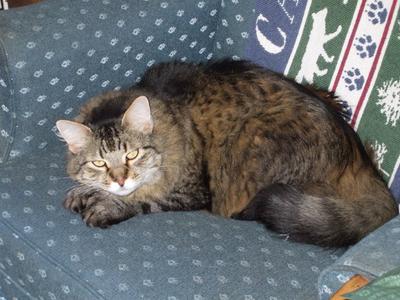 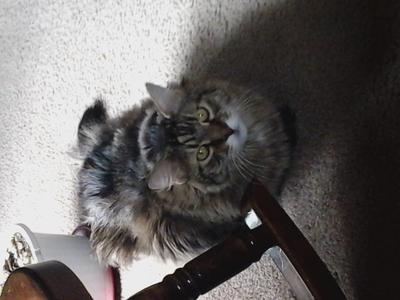 I got Pugsley when he was 5 yrs old from a lady I worked with. She had no idea what breed he was or when his birthday was. They had just picked a date in June of 1999. So this year he is going to be 15.

She was getting rid of him because he was going to the bathroom anywhere her daughter's boyfriend would sit. She was just going to throw him outside. So I told her I would take him.

I love animals too much to see him being thrown outside. He is declawed and neutered. I have thought he was a Maine Coon since I saw him. He is an 18 lb big baby. He loves to be held and loved when he wants and when he is done he lets you know. He talks to me when he is hungry or wants treats.

Never had a cat that was so vocal and drinks water like he does. Loves to be brushed and sleep with me at night. So what does everyone think is he Maine Coon?

By: Lauren in Pennsylvania 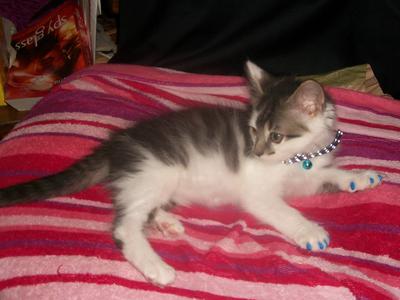 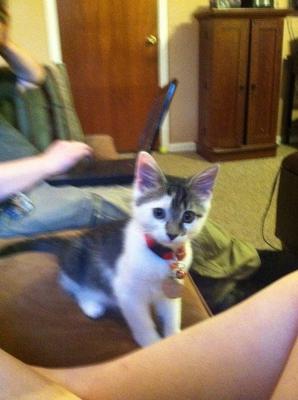 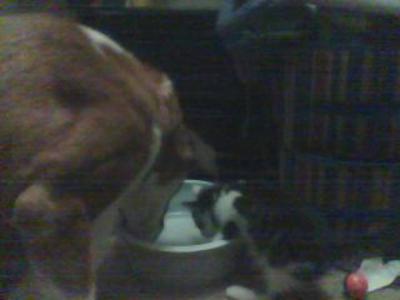 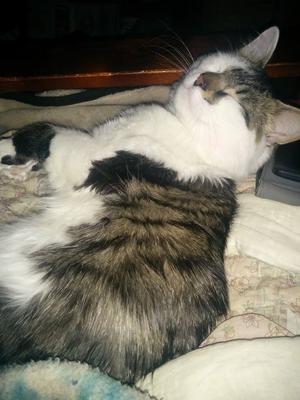 We got Stormy from a friend of the family who we'd gotten the dog we had at the time (since passed :( ), as they'd found kittens and were sort of our good luck charm for pets.

He and his siblings were found in the Poconos of PA, and my sister adopted his brother. The brother is a short haired red tabby, but our little one poofed out almost immediately!

The woman we adopted them from said that the mother was calico, though not if she was short or long haired (they managed to capture her and get her fixed, but then she broke through a window screen and ran off before they could try to home her).

He took to the dog like she was his mother, and for as long as they were together, they were best friends. He even insisted on drinking with her out of the oversized waterbowl, which he still uses now the same way, front paws on the rim.

Now, at nine months old, storm is a playful and affectionate little boy, and growing every day. His paws are huge, and he's just over ten lbs.

He loves to cuddle and talk with us, and is very outgoing and maybe a little too smart at times - he brought us the laser pointer to play two days after we brought him home, and loves to fetch and play in his water.

Friends who have cats, upon first seeing him, have remarked how much of a coonie he looks, just after a look at his poofy tail.

All that got me curious, and while he doesn't quite have a mane yet, he does have some handsome mutton chops. What do you think, is our little boy a partial Coon?

By: Chelsea in North Carolina 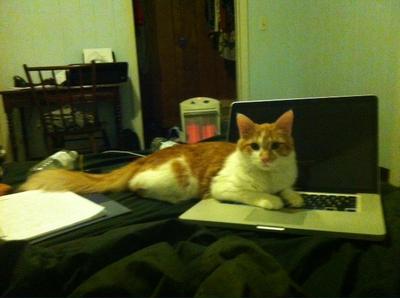 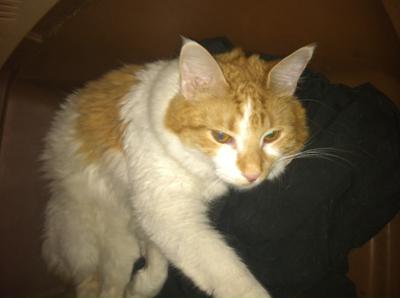 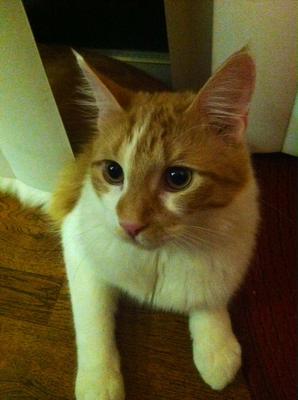 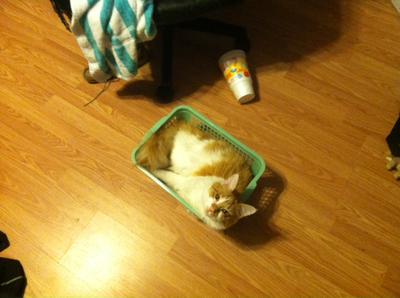 I noticed Tommy was different from any other cat I had owned before early on. He grew rapidly and by about 7 months of age he was 9 pounds. He is now a year and growing larger.

I notice he has white tufts of fur between his paws, as well as uneven shaggy hair. He also has a long bushy tail which most guests compare to a racoon tail and white wisps of hair on the tips of his ears.

He is extremely playful, much like a dog, and started playing fetch with me, without any training, around 6 months of age. Tommy is the most vocal cat I've ever owned.

He meows when I greet him, say his name, ask him if he wants something, or when I talk to him in general. He also randomly makes chirping noises while playing or when communicating with me.

Overall, Tommy is the smartest and friendliest cat I have ever owned.

By: Melora in Idaho

He's gone, unfortunately, but I would like to know if he was part Maine Coon.

He had HUGE feet. He wasn't even half grown when he was 8 months old. The next year at 20mos he was considerably larger.

He had a very heavy ruff. He weighed about 12 lbs. He meowed a lot at mealtime. He had long tufts in his ears. He had a fluffy tail.

I think he looked a lot like a Maine Coon.