Hi,
I have included a few pictures so you can get an idea of what he looks like. He has a very good personality towards my boyfriend and I but he often gets very grumpy when others try to pick him up. 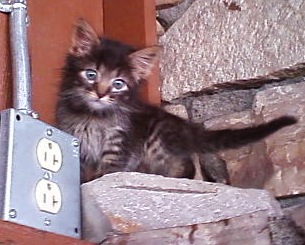 His name is Kush and follows us around often especially when he was a kitten. Kush would sit in the sink when I was in the bathroom doing my hair, he would sit be our feet while cooking (or even climb up our legs), and even slept with us.

I have noticed that he is a very intelligent cat. We travel often. When we let Kush out he often stays outside until early morning but when he wants to be let inside he knows exactly what window goes to the room we are staying in. He will find a way (no matter how high or low the window) to get our attention to let him in. He LOVES to play.

He also is an extremely superb hunter. He catches birds, mice, and even small size rabbits. Aggressive is not the right word but more of plays roughly with other animals. When he was a kitten a friend brought a full grown cat over and he had that cat backed into a corner. He also has a cat living with us that is older then him (but smaller) that he plays with but he seems to start out gentle and then get rougher as the play goes on.

Kush also seems to me that he gets jealous of other animals. If I pet another animal and then try to pet him he will duck and walk away. Food is something that is not a problem. He loves food especially raw meats. When he smells food his back twitches and he starts to meow and get friendly. If it helps he is now a year old and weighs around 12 lbs.

Thanks for the help!

Reply:
Hi K-lene!
Thanks for sharing the great photos of Kush! He's a lovely boy. First, your description: owners of Maine Coon cats do seem to find that they have a very "big" personality. You noticed how intelligent he is, and that is a Maine Coon characteristic. As for his hunting ability, or the aggression toward the other cat, it is a common misconception that Coons have an aggressive or dominant streak. In general, they are known for being really social and affectionate. But that said, every cat is different and there are exceptions to every rule. And he does sound quite affectionate towards you.

The photo of Kush on the bed looking at the camera gives me the best idea. He has the large, round almond shaped eyes I would expect to see. His nose is straight and long. He has long whiskers and "ear fur", and a little ruff around the neck. It is very similar to the facial expression I'm used to seeing.

In his profile picture, I can see his long and strong body, and 12 pounds is pretty significant for one year of age.

Based on all that, I would say it is entirely possible that he has some Coon in him. Without knowing his parents, we'll never know for sure, but he seems to have some characteristics. He seems to fit the bill for a part-Coon cat!

He's lovely, thanks again for sharing. Maybe when he gets even bigger, you can send us an update!

Kush looks EXACTLY like my cat Archie, who is a MC Cross. Absolutely gorgeous - best of both worlds!

Kush looks just like my cat Jackson. Who I believe to be part Maine Coon and part possibly Parisian. We got him from my friends cats litter. She hooked up with the cat next door. So it wasn't really a mystery. My email is -removed for privacy- if your interested in seeing pictures of Jackson. Take care!

I love kush, what a cat. I think he's a coon mix because he looks identical to my coon mix Gilbert. I know Gilbert is a mix coon because the person a bought him from had the parents on site( I know now that by buying him from regular person and not a breeder was not the best thing to do but I fell in love)
Any way I totally think kush is part coon