Is Chicken a Maine Coon Mix?

My cat, Chicken was picked up as a stray in front of my house a week before Thanksgiving this year~ She stopped in front of the house and began circling/rubbing up against my Fuu Dog (the guardian statue of my home) one night after my boyfriend dropped me off.

She saw us and instantly rolled onto her back and began playing with us, and we eventually fed her some milk an hour later and brought her in from the cold. 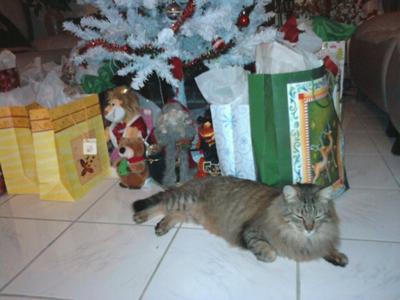 Since then, she's been in our family.

She's, I believe, a classic brown Tabby, and she definitely has the ear tufts coming from the inside of her ears and has the medium-long fur, and I simply love her mane~ She is a little chubby, though~

She is VERY vocal with what she wants, even going so far as to knock over my small trash can in my room if her meows don't wake me up (because that always wakes me up).

Whenever she wants something, she'll meow from the doorway or jump up right next to me and continue to meow until she gets my attention and has me follow her. Her meows are actually cute~

For her size (she's as big as my boyfriend's mother's dog, a full-sized Japanese Chin named Mia) she meows light (most of the time!) Other times, her meows are loud and sound like "Rrrrnnnggeoowww~"

She's like a puppy: she plays with toys when we give them to her (her favorite so far being a stuffed pokeball plush) and she follows us around when we call for her. She definitely knows her name, and she does respond to us when we talk to her~

She gets along well with our other pets: a baby snake, a rabbit, and a rat. She especially loves our bunny, Reila, even licking her face, and our Reila doesn't mind her either!

She was a bit iffy with Mia, who only wanted to play and never felt rejection from another animal, but Chicken eventually tolerated her and let her sit next to her.

I think this was due to her being a stray cat and being barked at by all the dogs in my neighborhood.

Last night, I experimented with her and water, by holding her over the sink and having her paw touch the water.

She didn't mind the water at all! She only started freaking out when she felt that she was going to drop =]

After having her in our home, I instantly fell in love with her (knowing that my cat allergies are gone for good, and that I can finally have a cat of my own again).

I've always wanted either a Maine Coon or a Bengal, and I was happy in thinking she might be a Coon mix. Even if she's not, I'd still love her just the same~ <3

Hi everyone! Just wanted to give everyone a good heads up that, after much research on behalf of my boyfriend and I, we've confirmed that Chicken is a Coon!

She's grown a LOT these past 2 years since we've had her, even my friends have noticed her growth! She's gained more weight, and her overall length has increased~

Chicken is gorgeous! She definitely looks like a coon.

chicken is a coon alright.

Hi Ruka,
Wow, this beauty just wandered up to you one day? How wonderful that she now has a loving home :)

I love the way you described her. The way she meows, and gets along with the other pets, it's great! And it sounds just like a Maine Coon.

Everything you described makes her sound just like a Maine Coon cat. It's possible she's a mix or a lookalike, but I'd lean toward Chicken being a Maine Coon!

Return to Top of Chicken