Hop on over to see this month's Maybe-Maine Coons, sent in by their owners to see if they have some Coonie in them!

By: Crystal Bishop in Seattle, WA 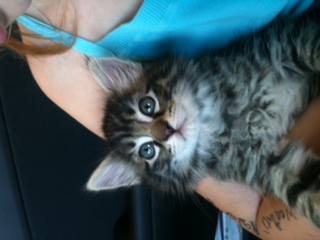 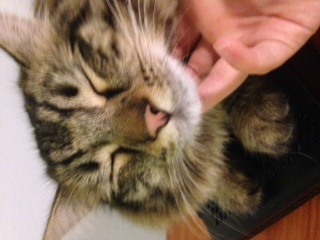 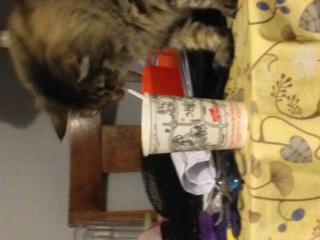 Veni trying to work a straw

Veni came to us as a free adoption at 7-8 weeks old (according to vet) Her mother showed up in a shed in a rural area. We went to see the kittens and we were smitten.

Veni's mom was a short hair torty mix. Out of the litter of 6, there were two long hairs.

Veni is now 2 (and a half). She just keeps getting bigger and fluffier. She plays constantly, carrying small toys around (anything will do) in her mouth. She rarely meows, mostly she chirps, twitters, and purrs. If she meows, we come running to see what is wrong!

We have to 'Veni' proof our house, as if we had a toddler. She will eat almost anything that she can swallow and has already had one surgery and one very very close call (ate sudefed from a foil pop out pill pack) I joke that I should change her name to Veni Vidi Edi... I came, I saw, I ate.

She greets everyone by chirping and throwing herself on the floor and rolling to her back. She really enjoys a good belly rub and proper cat worship.

By: Jillybean in Sydney, Nova Scotia 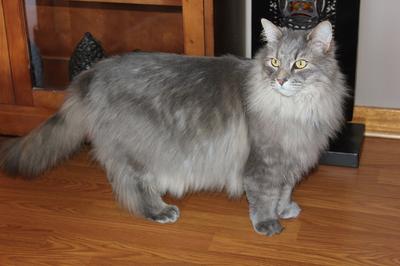 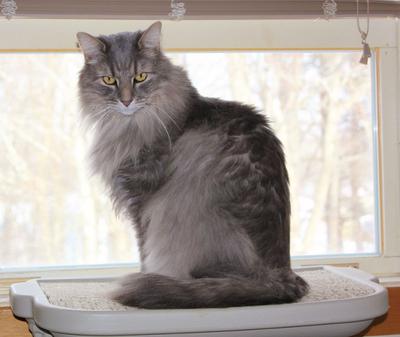 Bailey was found as an abandoned, 4 week old kitten, he was very sick. We took him to the vet right away and with meds and lots of love, he grew into a beautiful cat.

Bailey is now 8 years old, our vet is suprised that Bailey got so big, his paws are over twice the size of our other cats. He has no extra toes, his coat has 3 layers, when he splashes the water on to his coat, the water beads.

Bailey swishes the water in the dish with both paws before he takes a drink,he loves playing in the water. Bailey also kicks the wall on a daily basis, he backs up to the wall and kicks it, one foot at a time,we have no idea why he does this but he has been doing this almost every day for 8 years, lol

Bailey doesn't really meow, he makes a twerp, almost like meowing with his mouth closed. We have had many cats over the years, as we rescue cats and can honestly say that Bailey is the most unique, biggest and laid back cat we have ever seen.

By: Lori in South Carolina 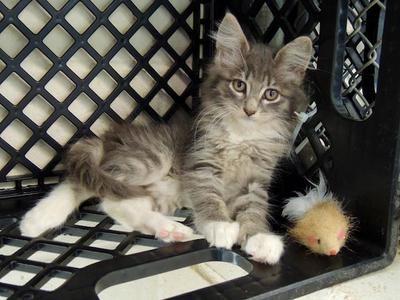 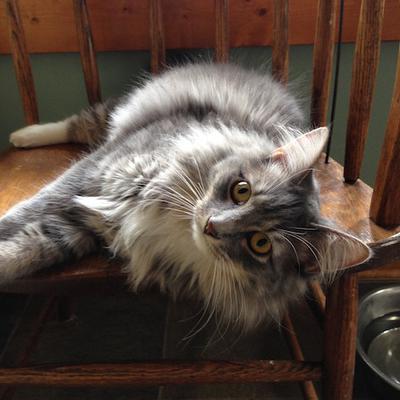 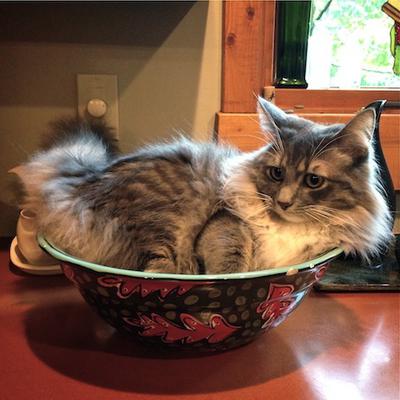 up to his usual antics.. 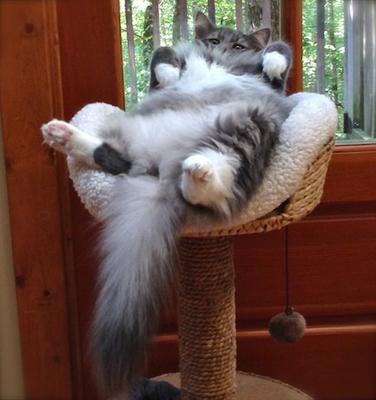 We rescued Leo last year after an afternoon of volunteering at our local shelter. He was 2months old and not quite 2 pounds (check out the size of his ears in the photo of him in the crate at the shelter!).

He has certainly filled out, and now weighs in at 14.5 pounds and is an absolute joy to have around. He loves to be where the "action" is, and always manages to flop down in the middle of the kitchen floor when I am cooking (that is how he lies down...with a thud...no dainty settling in for him).

He loves to play and often creates "bathroom art" with the brand new rolls of toilet paper. Leo carries his striped caterpillar toy around, leaving it in random places for us to find. He doesn't have lynx tips, but does have hair tufts on his ears and between his paw pads, along with a luxurious coat and a beautiful mane.

We will never know if he is a MC mix, but it doesn't matter, this beautiful boy has won our hearts.

By: Liz Litts in Mesa, AZ 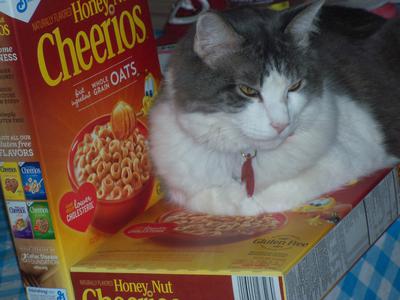 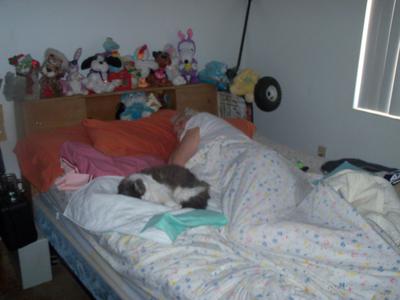 Zephyr with my dad 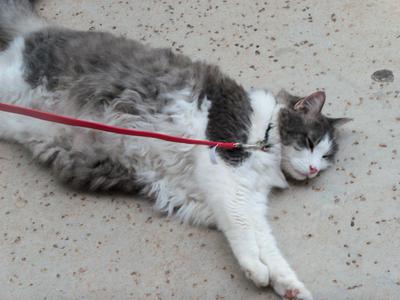 on his leash-and not happy 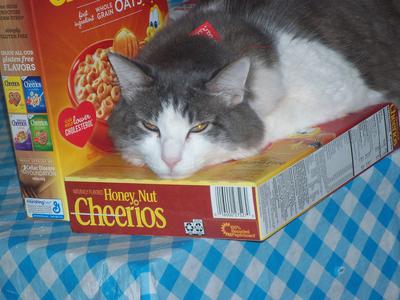 I don't know if he is full Maine Coon-but I recently adopted him from the local animal control.

He is just the sweetest thing-big boy--gets along great with the other two-'ladies' of the house and takes special care of my dad.

I love him so much-he really likes to cuddle and has a thing for toy birds--espically if they make noise. 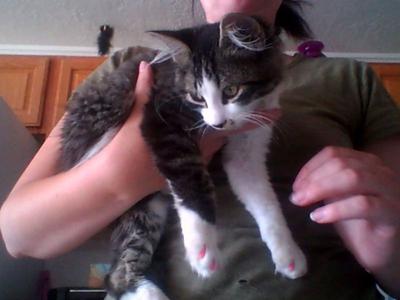 I found this little guy in a trash bag inside the communities dumpster after someone tried to throw him out literally with the trash.

I have no idea how old he is or what he is. But he has a very, very fluffy tail and is growing the longest fur on his britches and neck area, as well as long hair in his ears.

He had long toe hair, but it was matted very badly and I ended up having to trim off the matted stuff that felt like super glue. He is so very loving (loves to cuddle, sleep with me), is extremely well mannered/gentle (brought into a home with a three year old cat who has been crying/hissing, etc. But that thank heavens is almost over), and loves to play.

Any suggestions or hints as to what he might be?? Or how old he is???? We have to wait for the Vet to come back to town next month and I would like at least an idea of how old and what he might be.

By: Kelly in Manhattan, KS 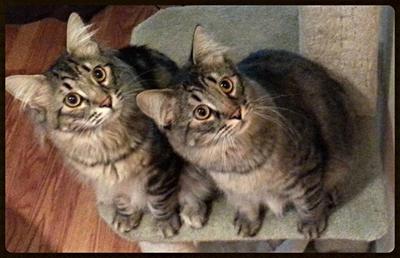 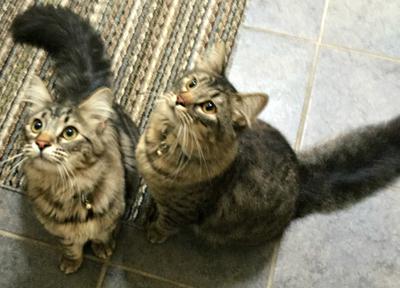 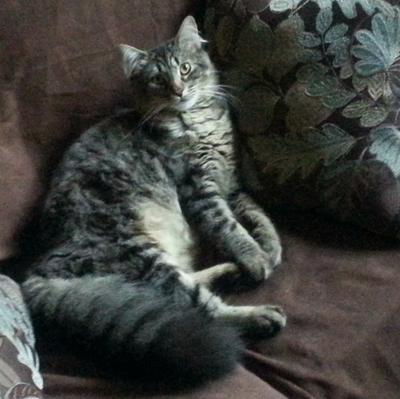 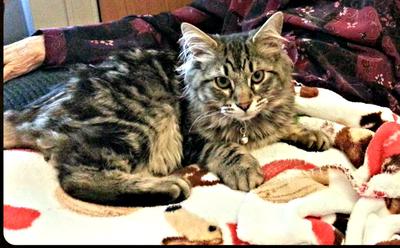 We adopted these two brothers when they were 4 mos old from Pet Finder/Humane Society.

We brought them home, took them to our Vet for a physical/shots & Vet said she felt they were a Maine Coon/Tabby mix according to their size and physical characteristics, ear/toe tufts, Mac's coat, eyes, huge feet & big fluffy coon tails. They are currently 10 mos old and are already 13.5 lbs.

My husband was never a cat person but he loves these guys as they are strong, hardy cats that like to be patted robustly and roughhouse with. They act more like dogs than cats.

Overall they are not lap cats but are always lying around/near us and they like to be in the middle of ALL our daily activities. They are always hanging around waiting for us to return from work, bringing groceries home, working around the house & following us from room to room.

They are so sweet, gentle, smart and they have been taught to sit for their kitty treats! They do not "meow" much and if they do, its very soft & quiet. They communicate with us with trills, chirps and chittering. They have started to become very interested in water and stick their paws under the running water. Lord help the mouse that finds its way into this house!! Quinn has already caught his fist baby mouse (but wasn't sure what to do with it) and toyed with it.

They are very friendly & not timid in the least bit. Of course they are still young and have a lot of growing yet as they get bigger, so does the size of their mischief.

Of course there is no way to ever know if they are part Maine Coon and it really doesn't matter, we love them and will always love them just the same. They bring us constant love, entertainment, companionship and laughter to our home.

Is Big Lou A Coon?

By: Erica Hitt in Richmond, TX 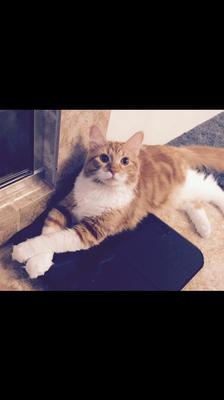 Louis (pronounced "Loo-e") is the perfect mix of loyalty & independence. He will follow us into every room, and sit observing and waiting to help or play when he can.

He LOVES water, and he'll climb up on the bathtub and dip his paw through the water when we take baths. He'll also wait outside the shower door watching the water fall, and then he'll get in the shower to explore when we step out to dry off.

He's also obsessed with toilet water, his water bowl & pretty much just water in general. He has long tufts of fur between his paws and long fur growing out of his ears.

He has a furry puffy white chest like a lion. He is affectionate, yet independent. He is verbal, and his noises sound different from the usual cat. They are high pitched, somewhat rolling sounds. He is great with both my 5-year-old daughter and our 8-year-old miniature shih tzu. His tail is long & super bushy.

He is only about 8 months old, and his paws are still HUGE in proportion to his body. He is a playful, goofy, loving sweetheart, and we have absolutely fallen head over heels in love with this kitten!

By: Therese in Iowa, USA 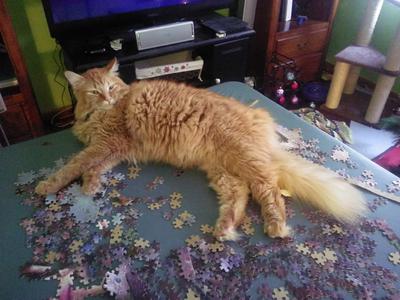 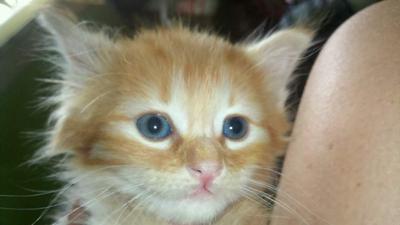 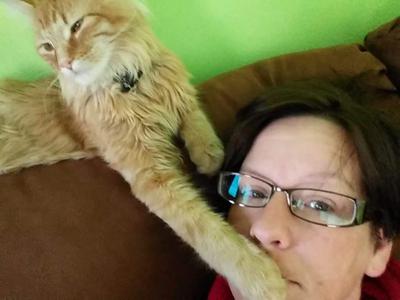 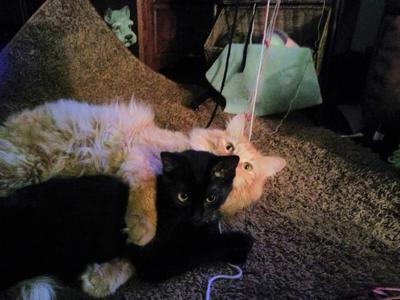 Oh my goodness!!! Charlie is the SWEETEST cat I have ever seen.

He follows me everywhere, gets along with everyone in the house including our 2 dogs, trips me constantly and I am so in love with him!!!

No clue if he's part Maine Coon but I think he fits some of the traits. He's pretty big, fur growing out of toes, sweet as sweet can be. Wouldn't trade him for the world!

By: Enrico Reginato in Catania, Italy 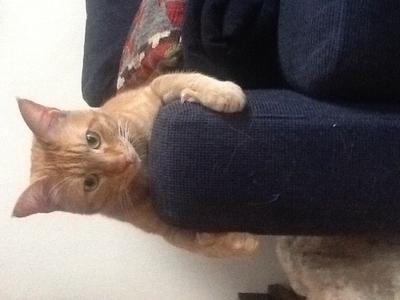 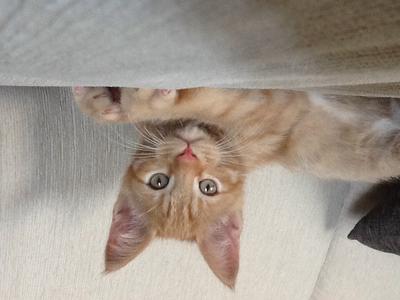 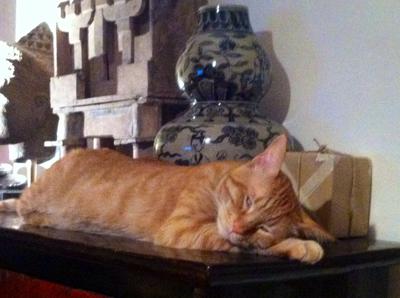 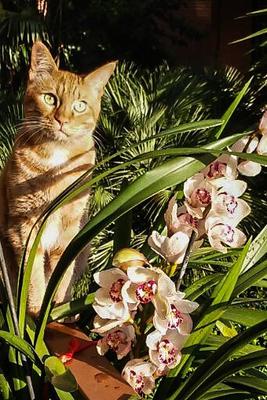 It is a redhaired cat, sterilized, now one and half year-old, weight 6 kg, slim, with short hair, great ears with hairs no the top, lynx-style.

Very nice attitude, he likes to play, always follows us in our home. We often travel and he comes with us on planes. Every early morning he starts mieowing, with soft voice and he wants us getting up.

He doesn't like to be taken and embraced, but he often rubs our legs and lays down on the floor to be caressed. He is very demanding for food, and not hungry.

By: Tina in Owego NY 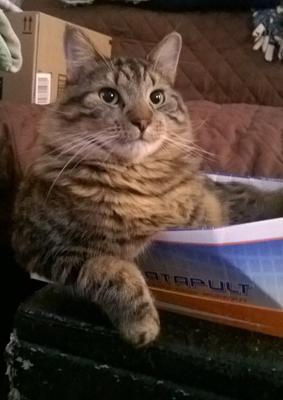 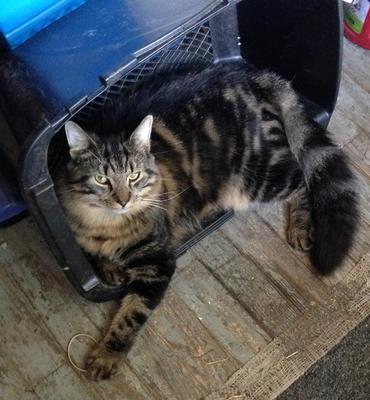 We first received Shelby a little over a year ago. He was found abandoned in an alley. We were asked to "foster" him.

He quickly stole our hearts and has been a wonderful fun part of the family.