Meet our Maybe-Coonies for August 2014! 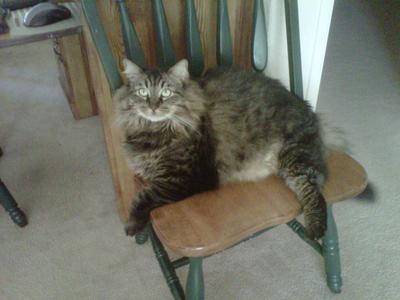 My son Max adopted Jack at the Humane Society in 2005.

Jack is a beautiful, gentle, loving cat that weighs in at 25 lbs.

Max trained Jack to never cross the threshold into the outdoors and Jack would never think of getting on the counters or tables.

He loves playing with our 10 lb pomeranian and had never hurt her.

Jack traveled from Arizona to North Carolina in the car with Max and did great.

Max just left for college in Minnesota and Jack misses him very much. 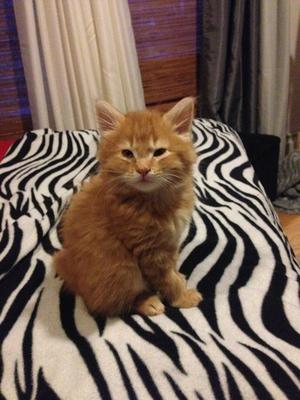 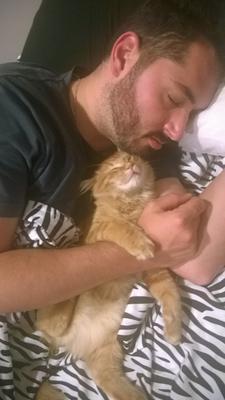 Me and Chester sleeping about 14-16 weeks old 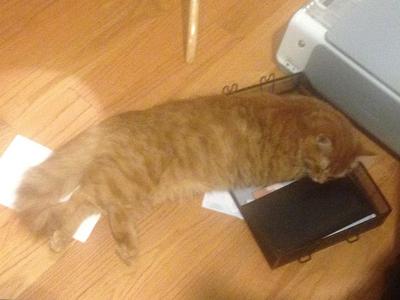 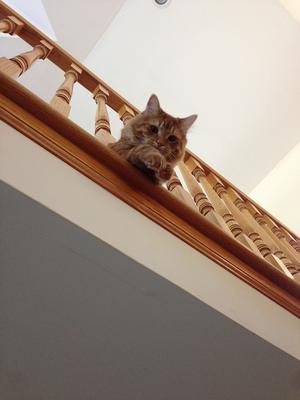 I got Chester from a friend of a friend. I just wanted an Orange Male kitten. She showed me a picture of him and I fell in love.

When I first got him he was very affectionate with in minutes. He loves everyone! He was a little puffball with a little puffy tail almost like a raccoon.

From the first day we got him, all he wanted to do was play, be held, and give kisses. He follows me around like a dog. Its like clock work every morning 6:15am he meows at the bed, I move over he jumps and "headbutts" me. I pet him, he kisses my face then I get up.

We have a full grown (9yr old) cat as well, and he was introduced to her a few weeks after getting him. From the first introduction he was not scared of Beauty, he just wanted to play. She did not...

Now he chases her around and "plays" with her even though all she does is hiss and beat him up.

Once he started getting bigger I noticed Maine Coon type traits in him. His personality for one. His tail just kept getting bigger and puffier. He has ear hair that blows in the wind. His paws are almost half dollar sized and he is only 7 months old and weighs in at just under 9 pounds. He is pure muscle.

I have been tossing around the idea of him being a mix but I know how rare wild Main Coons are. 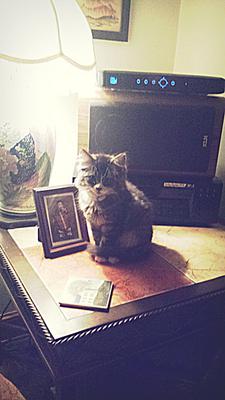 Maybe Allen is a mix?

By: Tammy in Maryland

I found him in my parents barn at 2 weeks old.

I bottle fed him. He's about 6weeks now.

By: Eugena in Richmond, VA 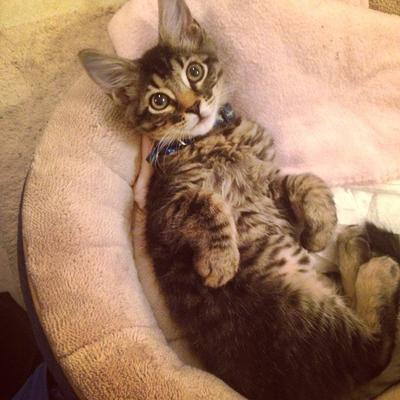 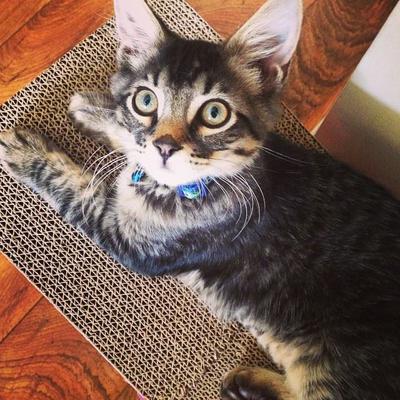 We adopted Hanson about 3 weeks ago because we thought he was the most beautiful cat! He has very large paws, and wavy fur on his chest. He also has ear tufts!

As far as personality goes, he has a big one! He loves to play, a lot, and often. He doesn't like being held for long, but does enjoy a good ear scratch and tells us he loves it by very loud purring!

He enjoys being close to us and even tries to sleep with us at night.

After a bit of reading we think he might be a maine coon mix, but wanted more opinions! What do you all think?

By: Laiya in Martensville, SK, Canada 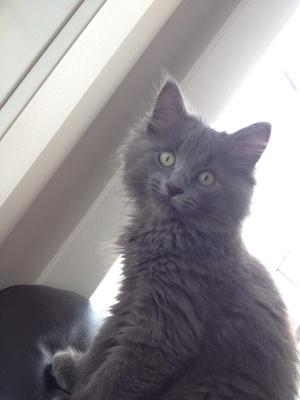 Harlow is a four month kitten we got from the shelter about three months ago.

We have a Maine Coon Ragdoll mix as well (who resembles a Maine Coon but acts like a Ragdoll), and I immediately noticed that Harlow and Micah have some serious similarities in appearance, but Harlow is way more Maine Coon-y in his actions.

He's four months and already almost as big as a normal house cat. He's got the broad muzzle, the intelligent eyes, the long, water resistant fur (and he LOVES baths, he jumps in with me all the time) the giant paws and the fluffy tail.

He's vocal, playful, smart (he plays fetch and knows how to sit and lie down on command) and he just conducts himself in the goofiest and most ridiculous way.

What strikes me most is his colouring, which is white underneath and slowly fades to a fairly solid and shiny blue/silver. I've never seen a cat with his colouring before. It's very odd. He also has dark eyebrows. What do you think? 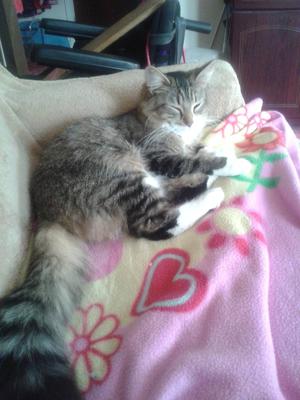 I think we have a Maine Coon cat but can't be sure so if you can tell me if we have it would be very much appreciated.

I hope you have enough to go on in telling us if we have a Maine Coon or not whether purebred or not. Thank you. Becki Barnett.

By: Miranda in the Bahamas 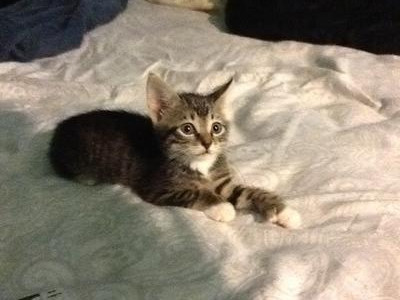 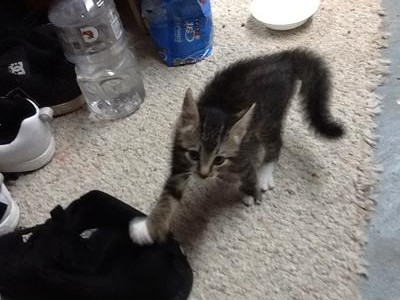 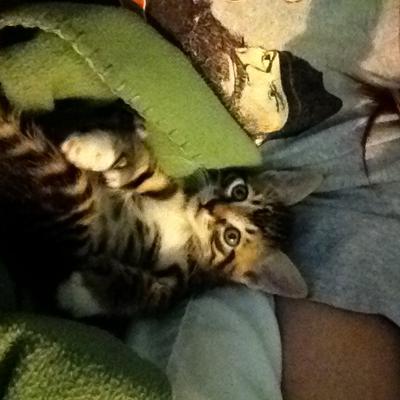 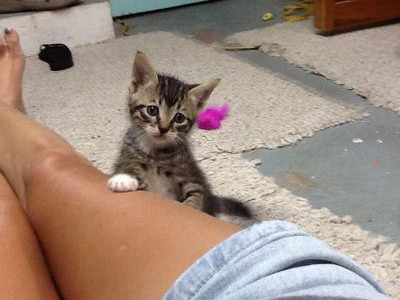 I think he has Maine Coon in him he is only 2 months.

By: Miranda in Shiloh, OH, USA 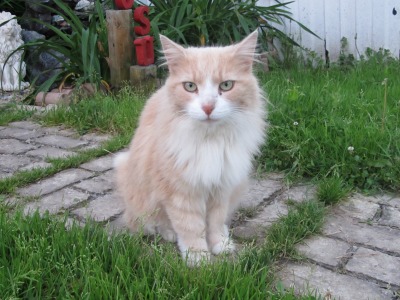 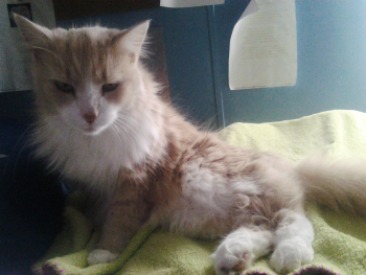 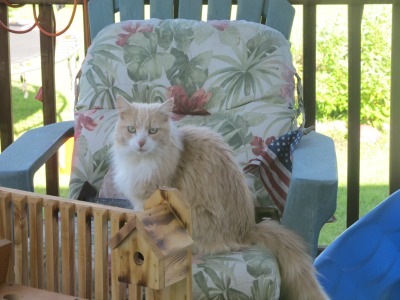 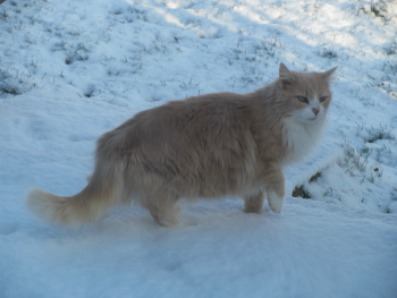 Sissy was a very sweet and loving cat.

She wasn't the biggest, average size, but she could make the loudest purring sound when she was happy, which was almost all the time.

Sissy actually came to us as a stray. She had burrs all over her matted fur. She was on the thin side, too. But we made her apart of our family and after a couple weeks, she started to look better and gain some weight.

She was probably around 2 years old when we got her. Sissy was a well mannered cat. She never gave us a reason to yell at or scold her. She was always by my side.

Unfortunately, we had her PTS on March 26, 2014 because she had an incurable illness called Feline Infectious Peritonitis, which of course is a fatal disease that some cats are born with.

Cats that are sick with this can hide any symptoms for months or years after birth until the disease hits crisis mode and the body starts to deteriorate. We had Sissy for 3 years.

Based off of her appearance and sweet natured self, I have always thought she had Maine Coon in her but I recently looked up some domestic longhair pictures and they look like her, too. Any help would be greatly appreciated! 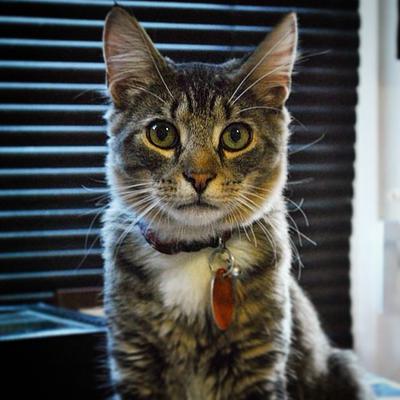 Im not sure if he is a Coonie but he's got a lot of Coonie personality.

He was rescued at Coney Island boardwalk last March 1st and we believed that time he was 3 months old already.

He is adorable and everyone loves him.

By: Tasha in Missouri 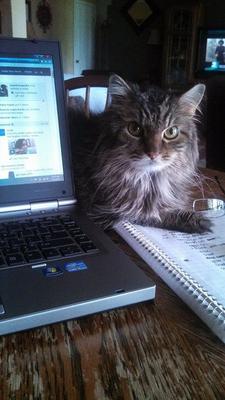 Is my Smokey a Maine Coon mix?

We got him from a man in front of a store with a bunch of kittens in a box, he was the only one that was the 'tabby' color with stripes.

As he got older, he has the traits and characteristics of a Maine Coon and we have always wondered.

By: Ronna Lee in Philadelphia, PA 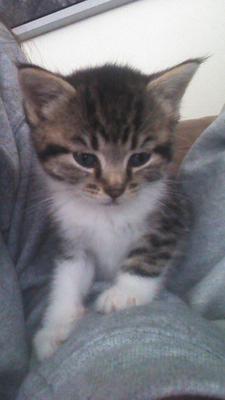 Baby Liz with her blue eyes 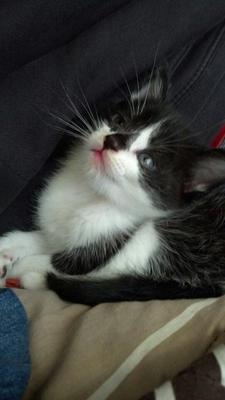 Baby Luna with her blue eyes 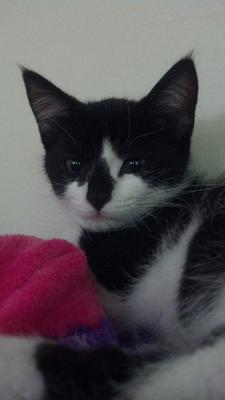 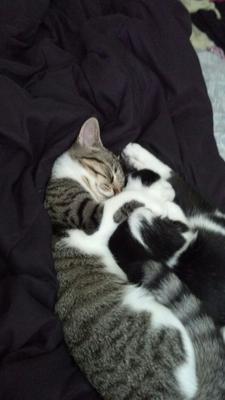 We adopted these little kitties when they were between 3 and 4 weeks old from a Maine Coon breeder as "accidents". They were much cheaper than the pure bred kittens ! LOL!

The sisters are now almost 5 months old and weigh close to 5 lbs each. They are very loving and cuddly, and are very comfortable around guests. They love to play together and with us.

Liz loves to play fetch, and Luna likes to watch. They both love to watch TV with us, especially hockey. They follow me around like little kids during the day when it's just us girls, and they love to cuddle each other during naptime.

I hope they grow up to be large cats like their mama cat, but I'll love them no matter what! 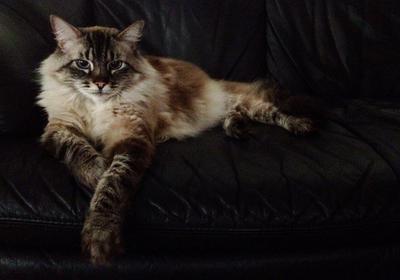 By: Josh in Glendora CA USA

Adopted him from a shelter and was told he was a 4 year old lynx point Siamese.

He was rather scrawny but after having him almost a year he weighs around 17lbs and is a loveable lap cat that always wants to be touching a human.