Fluffy, Big Red Angus, Riley, Kitty Kitty and more have posted here to see what you think of them. Are the part Coonie?

Angus is a rescue cat and very loving. He has a fascination with water, and likes to sit on the side of the handbasin and watch the water coming out the tap.

He follows me up the driveway each night to my Mum's place for dinner - just like a dog! He has tufts of fur between his toes, but no tufts on his ears. He has a "mane" and is a big cat!

He is very vocal when he comes inside - likes to let me know he is back. He has been with me for 4 months and I am very happy that I saved him from certain death.

It looks like he does have some tuffs inside his ears - they are called "furnishings". What he doesn't have is the Lynx tips on top of the ears, but a lot of Coonies do not have those.

A very handsome Maine Coon cat! Love his markings!
You are blessed to have him in your life. They truly are your best friend! 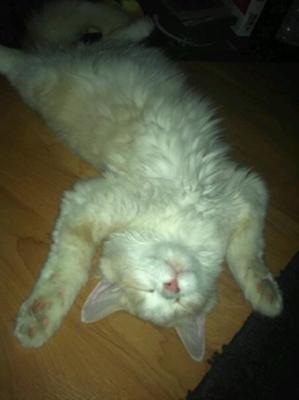 Raise your paws if you think you are a dog

Riley was adopted at the animal shelter, his siblings were all white and he had one all black brother. He is the only one with stripes. The mother was found with the litter by a dumpster.

He's still very small (he was born March 9th), but I Had a Maine Coon before and they have the same personality and body type.

My past Maine Coon died in November of heart disease, it happened over night and I was absolutely devastated. While he was un-replaceable, Riley helped me heal. He acts JUST like him.

While Riley is still a baby, I can tell he is going to be a big boy! His paws are big already and he has gained almost 2 pounds in one month.

Without even asking if he was a Maine Coon, the vet said he does not have the normal coloring for one but his body looks like he has some Maine Coon in him.

Riley doesn't leave my side, I almost trip on him all the time.

He follows me everywhere and if i get ready in the morning and shut the bathroom door he will be sure to let me know he needs IN!

He loves to play in the water and has jumped in the shower with me.

He constantly chirps like a bird and sleeps on my head at night. And he never misses bedtime, he always is sure to come to bed when I go to sleep.

He is extremely outgoing and thinks he owns the world. He is always sure to greet me at the door when I come home.

Looking back on pictures I took when I first adopted him, his tail and neck appear to get fluffier and fluffier, so do you think he is a Maine Coon?

Thank you for your help and I love your site!

I got my cat from a friend of a friend, and out of the litter I heard mine is the smallest cat. This cat is different from other cats I have seen.

She constantly follows me anywhere and likes to look at what im doing and she runs to greet me when she hears my car, its like having a dog I love it. When she was younger we would play fetch and even now we sometimes play tag.

Everyone loves my cat but I wish I knew what she was.

comments:
Looks M.C to me
by: Hermione ze cat

I think she definitely looks and sounds M.C

Hi, she is beautiful, you must be very proud :) She sure looks like she has some MC in her, but if she has or hasn't she is stunning. treasure her every day. Do you have a close up of her face and muzzle?

Cute Kitty you have there. :-) Her personality sure sounds like Maine Coon and she has the ruff around her neck as well as the bushy tail. I am saying yes to Maine Coon X. :-)

Your Calico
by: George Hilton

What a beautiful cat you have there, regardless if she is a Maine Coon or not you have a wonderful companion there!!

Is My Cat Part Maine Coon?

I found my kitty through a friend who obtained him from a shelter--my friend couldn't keep him because his roommate's girlfriend was deathly allergic.

He was six months at the time and now he's more than five... time really does pass quickly! I thought he was just a regular tabby, but noticed that he's much different from other tabbies that I had while growing up.

Aside from being incredibly long bodied, he loves water and playing fetch, and has since he was a kitten. He trills quite a lot too, is talkative and is incredibly social with strangers.

He also seems to be more affectionate, loving to climb on my stomach and lick my skin and sometimes even hair too.

I had never heard of Maine Coons until recently (I always thought I was more of a dog person--after having been raised with both cats and dogs as family pets--as fate would have it, my kitty seems to have many dog like characteristics) when I made friends with someone who has one and she thought he might be a mix.

Does he seem to have webbing/tufted toes? That might be another clue. MCC of not, he is VERY HANDSOME! How lucky you rescued him!

I have owned cats all my life and along the way I've had some that were DSH, but had all the attitude, love, talking, purring, trilling, water bowl sports, and size of a MCC.

Just because they have a great personality doesn't automatically mean they have CC genes. There are fine cats in every breed and every plain short haired or long haired domestic.

There does seem to be more of the lovable ones in the CC breed, but I think that is because of selective breeding and being raised under foot.

Your handsome guy is worth a million, no matter his genetics. He fits your family to a T. You are blessed.

Thanks for sharing him with us.