Welcome to the April Photo Album of Maybe-Maine Coons! It's springtime, and our pages are blooming with pictures of awesome kitties! 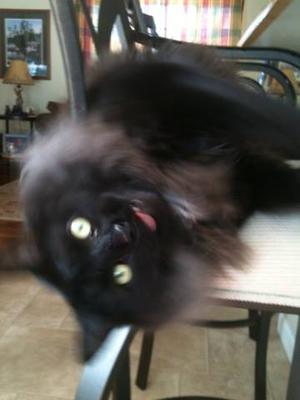 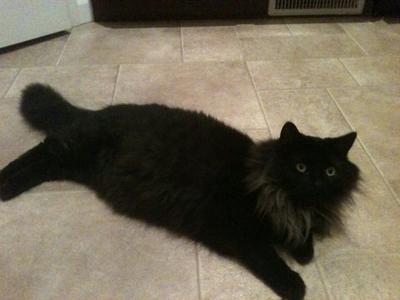 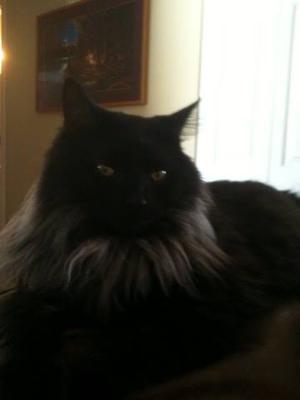 We believe he may be a Maine Coon, or at least mostly Maine Coon. He has the physical characteristics, but more than that, his personality is all that of a Maine Coon Cat.

Whatever he is, we love him so much. He is really a great cat. We rescued him from going to a shelter.

Physically he has the ruff around the neck, a thick coat, ear and paw tufts, long and thick poofy tail, yellow/gold eyes that captivate me. He just turned a year this month and weighs in at 12 pounds, he is not "fat". He's just big and I believe he will be bigger. As he's getting older his ruff is becoming more.

His personality is huge! He talks as if he know what he's saying and understands what we're saying. He trills, meows, and chirps. He is always by my side or following me as I do my chores or whatever it is I'm doing. He's sitting next to me right now as I type this talking away.

He plays fetch, comes to his name, waits at the door for us to come home, and love to play. He welcomes visitors to the house and has never been snobby or mean.

He sleeps with us at the foot of our bed and sometimes between my husband and I after he's cuddled with us for a bit. My favorite thing he does is it seems he waits for our alarm to go off. As soon as it sounds he gets up and talks and chirps at us until we get up he may also lend a friendly paw on our faces. He then follows me to the bathroom and talks non-stop as I do my morning business.

He's great company no matter what I'm doing. He is part of our family and he's a blessing. We just love his personality, he's great with the kids. He's more like a dog than a cat.

By: Sara Hernandez in Texas 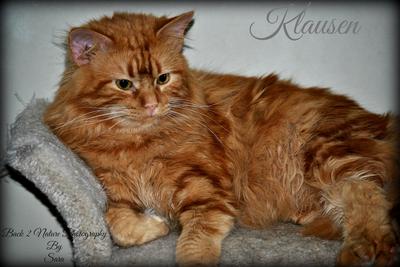 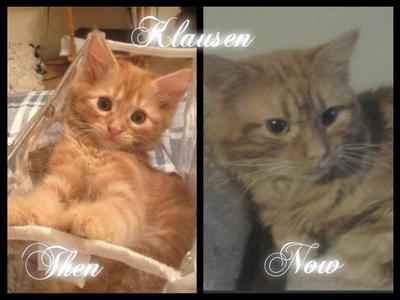 Klausen as adopted as a baby so cute but had very big paws.

As he grew older and before he got neutered, he was bigger than any cat I have ever seen.

He is now at 22lbs a bigger than my 2 female rescues combined.

Is my little Teddy a Maine Coon?

By: Yasmin in Worcester, UK 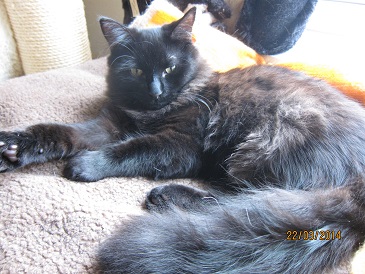 Teddy is six months old from a Rescue Centre. I have looked at lots of photos of Black Main Coon cats on Google and some of them are identical to my little Teddy.

He has a smokey tummy and in the sunlight he has chocolate highlights! He has long hairs coming out of his ears, a definite fluffy mane around his neck and the biggest bushiest tail I have ever seen. Could he be a Maine Coon????

He has one toe missing on his right foot, which makes me wonder if he was rejected because of this.

He is full of character and follows me around, is into EVERYTHING, huge appetite and always up to mischief!

He does chew up paper and cardboard all the time, but this could be due to his early days, if he was not fed regularly or something like that. He is very very greedy!

Anyway, could he be a Maine Coon? He sure looks just like one to me! 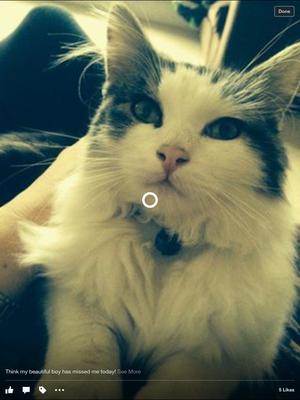 By: Caroline in UK

Here's Dexter, he's 8 months old and seems to fit all the characteristics of a Maine Coon.

He's a rescue kitten so I don't know his heritage. 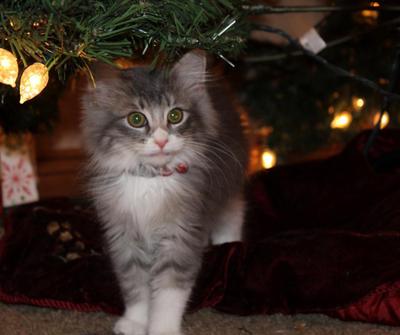 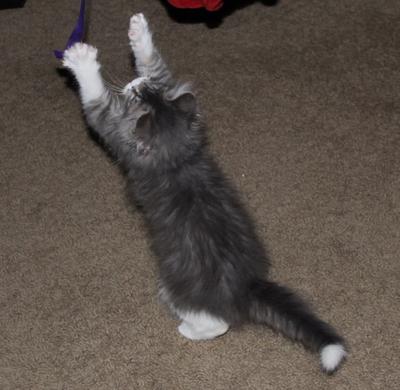 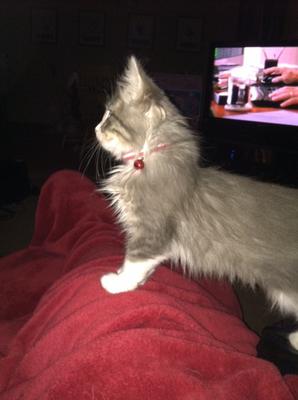 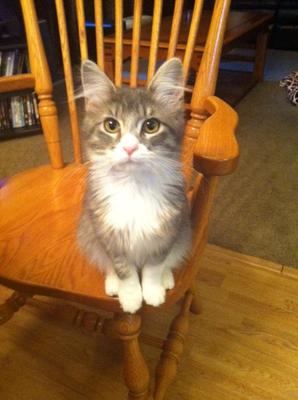 This is Holly Belle! we adopted her from a rescue organization at what we think was 12 weeks of age.

Her personality is different than any cat we've had in the past. She acts more like a dog than a cat, carrying toys around the house and wanting to sit right next to us.

As she grows she seems to be developing heavier fur coming out of her ears (althought she still isn't growing into the ears themselves). 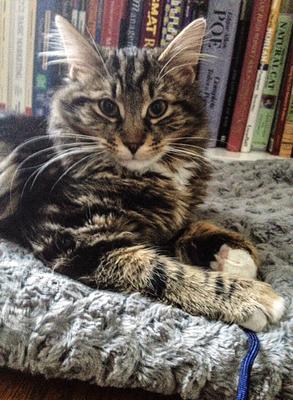 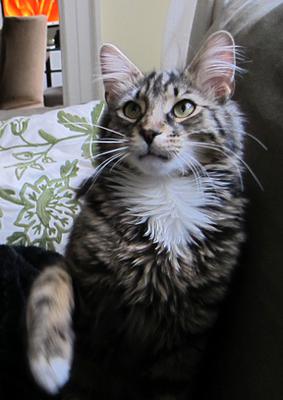 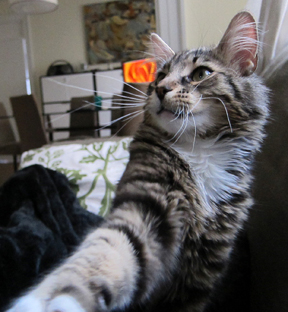 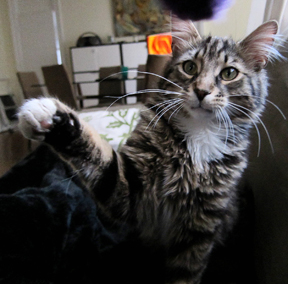 A very bright, sweet rescue boy that looks kind of Maine Coon, but also sometimes he has an Oriental look. I have two other rescues, one that may be part Maine Coon (will post separately) and one that turned out to be a gorgeous Siberian Forest Cat.

Both of my cats love Bailey Jr. and he loves everyone! Very easy going and good natured. He also just loves having his belly rubbed. Petting time involves Bailey lying on his back with his legs spread out wide - very cute!

What do you think? Part Maine Coon? No ear tufts unfortunately.

By: Louise in London, UK 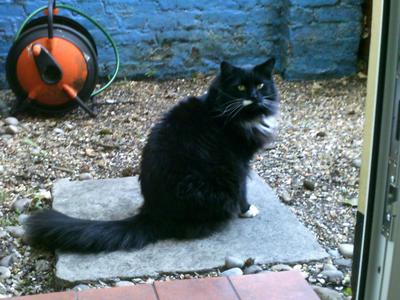 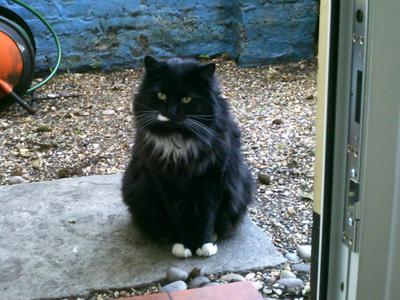 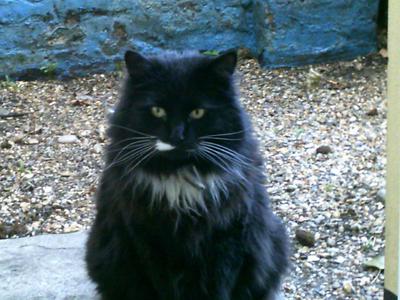 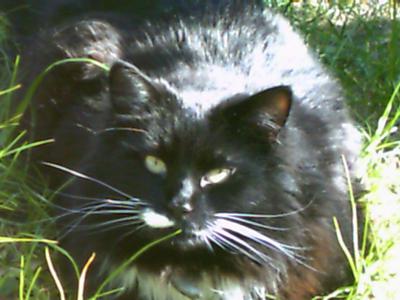 Scrappy was a rescue cat from a shelter and we adopted him from 8 weeks old. He is full of play, HAS to be the centre of attention when friends come over, not afaid to get in there and make sure everyone knows he is there.

He likes to sleep either in the wardrobe or the bathroom sink and loves to explore dark places and cupboards. His mieow is totally different from my other two cats and is rather a "mow" than a mieow. His tail is most distinctive feature as it is rather large like a squirrel's tail and extremely fluffy.

He has so much fluff on his paws and toes well in fact he is a total fluffster and large but a big softy. He loves sleeping with the dog and doesnt care about walking on and over the dog to get where he wants to go.

Is he a Maine Coon? I am not sure.

By: Ashley Hartell in Leesville, Louisiana 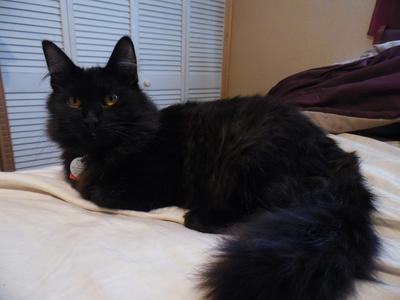 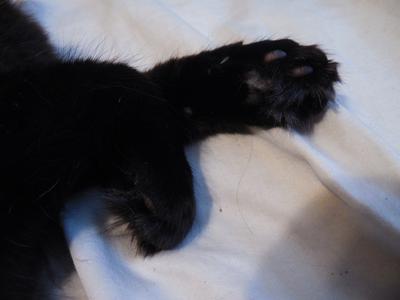 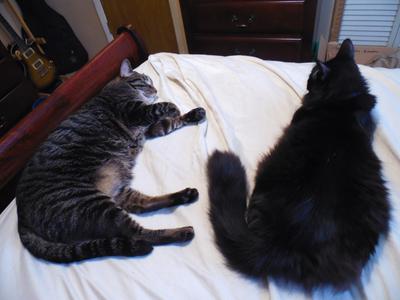 this is him compared to my other full grown kitty. He's only a year and is already as big as him.

My last cat lived 17 years before he died. He was a maine coon cat. I loved him dearly and we grew up together. I had him since I was five years old.

Not too long ago, Sam passed away. I desperately wanted another coon cat, but couldn't find a breeder close enough. I decided to start searching at the pound and local pet shops. That's when I found Charlie.

Charlie was a rescue animal. I walked down the aisle in the pet store, I was drawn to him. He stuck his paw through the kennel and grabbed me. When I held him, I immediately decided this was going to be my next cat. He was fluffy and cuddly like Sam. We chose each other that day.

Charlie was 5 months old when I brought him home. (estimated birthday) He's almost a year old now and boy he's grown! Charlie has gotten along and adapted to three different kitties and a ferret.

He is SUPER playful. Almost too playful lol. I know he's still young and will tame down as he grows. For now though, he plays with anything and everything.

He's smart. When Dad gets off work, he waits by the door patiently to get petted. He loves to meet and greet his Daddy... I sort of feel he's taking to him more than I, but that's okay. :D

By: James in Texas 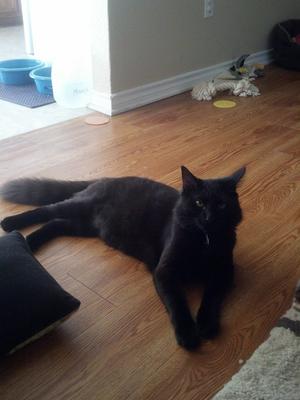 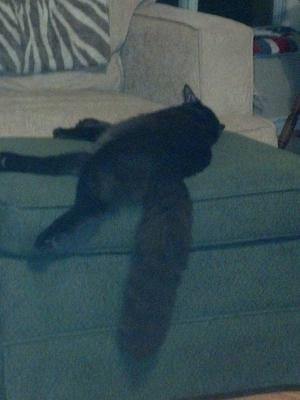 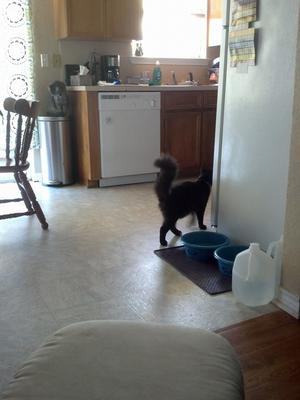 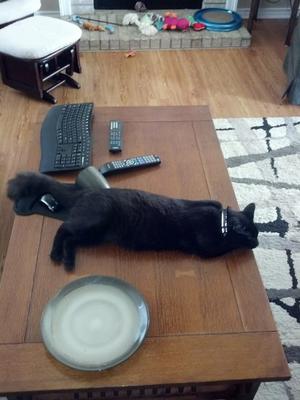 Picasso came from a shelter. I wanted a Maine Coon cat, but couldn't find very many breeders where I am at, so I decided to settle for a shelter cat.

I knew when I spotted him something was different about him; he had a bushy tail and a long body. His eyes were what drew me in closer. He has a very intelligent gaze!

The lady that worked there told us he was only 6 months old, yet he looked like a full grown housecat. In the past few months he's gone from 11 pounds to 15 pounds and still growing.

I threw his favorite toy (a dragonfly on a string and stick) down the hallway one day and to my surprise he darted off and came back with it in his mouth!!! I've never had a cat do this with me, and I was even more surprised when he dropped it at my feet and looked up like he wanted me to throw it again!

He LOVES water. He swishes his water around and licks it off of his paws. He even paws at the ground like he's clearing something away from the front of the water bowl. I often find him following me into the bathroom where he jumps into the tub and chirps happily as he swats at the water left from a shower.

He makes these trilling noises when he runs, and his bushy tail is always up as he charges around the house. He's gotten quite big, and when he throws himself onto my stomach, it nearly knocks the wind out of me!

His most charming quality is he always wants to help. By help I mean constantly in the way! I love him, and even if he's not a Coon, I will take care of him forever!!!

By: Susan E in Missouri 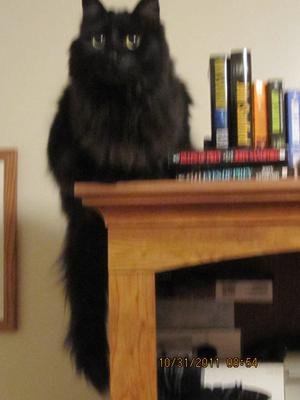 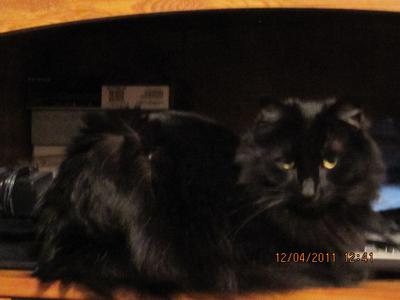 Bagsy is a strapping, handsome seven year old. He is the most congenial, gregarious cat I have ever known.

Bagsy adores water: toys must be drowned on a regular basis; paper must be dunked; he likes to scoop up water and drink from his cupped paw. He gets along well with his two adopted sister-cats.

Bagsy is a clown--my mother calls him "the giant kitten". Bagsy has tufted ears, snowshoe paws, a lonnnnggg fluffy tail, britches, a ruff and mane, and a very furry tummy.

Bagsy follows me everywhere and is rarely far from my side--unless we're playing fetch with a toy or he's chasing or wrestling with his sisters. 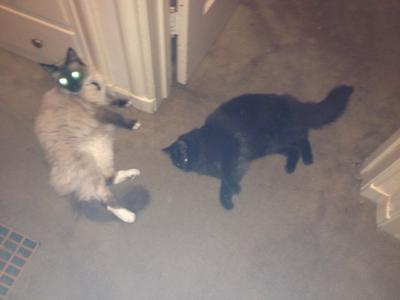 I Have A Black Cat Said To Be Part Maine Coon..

By: Chase in California

Wondering If My Cat Is A Maine Coon

By: Mirna in Long Beach, California

Bella Of The Ball

By: Dian in CA

My friend helps stray cats. So her mom cat had a liter of kittens and she asked me if I wanted a kitten! I said ok she is so very cute!

Well the older she gets the bigger her paws are getting plus this huge fluffy tail with raccoon looking stripes!

I really think she is a Coon cat for sure! Oh and she also has a long body!