Meet the April 2013 Maybe-Coonies here! This is where cat lovers come to ask one another, "does my kitty have some Maine in him?"

By: June in Hertfordshire, England 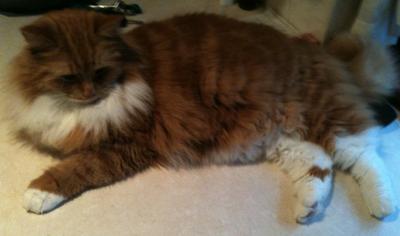 I have just rescued Maxi and he is 6 years old and has settled really well in his new home.

He has all the lovely characteristics of a Maine Coon, but I wondered if he is a mix or not, could anyone tell me please.

By: Dahloan Hembree in Jacksonville, Florida

I know it is difficult to figure out if a cat is part Maine Coon, but my cat, Cleo thinks she is something special. I am sure she is part - she is so friendly, hates to be on your lap, but wants to be near you at all times, is very bright, insists on only eating when we eat or are in the room with her, she plays hide and seek and loves to take walks.

She lacks the thick outer ear tufts, but has inside tufts. her tail is not as thick as a Maine Coon's would be. Maybe someone could take a look and let me know if she looks part maine coon? If not, she thinks she is special anyway. She looks SO intelligent, like she knew I was taking her pictures!

By: Linda B in Conroe, TX 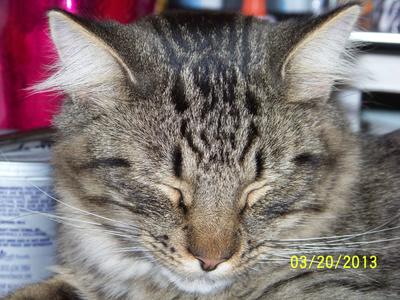 He has developed the long fur in his ears and around his neck. He has small tufts at the tips of his ears. He has a bushy tail and a lot of extra fur between his toes and very large feet.

He is very loving and wants to sit with me wherever I am, mostly at the computer where he walks on the keyboard trying to get to my lap ! He is very vocal with several different sounds, depending on what he is asking for. Sometimes he walks around the house "chortling" when he has "lost me".

Tiger was born feral in our barn to a mother cat who looked a lot like him. Other than than, we don't know his heritage. We caught the mother and 2 of her litter and took them to the County Rescue Society. When we got home, we heard a pitiful meow and found our treasure.

I simply could not take him to the shelter even though I had 2 other cats. At 6 months he is very much a part of our lives and a blessing. God does know when we need to smile and laugh.


Is my "Spook" Part Maine Coon?

By: Julie Boehm in Sydney, Australia 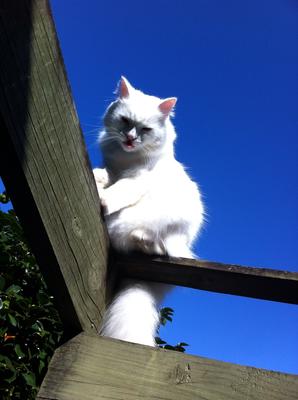 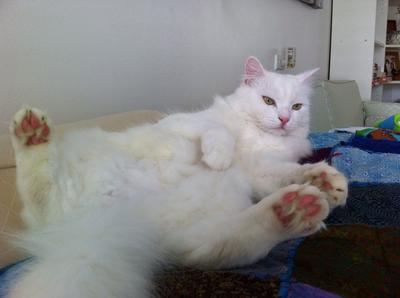 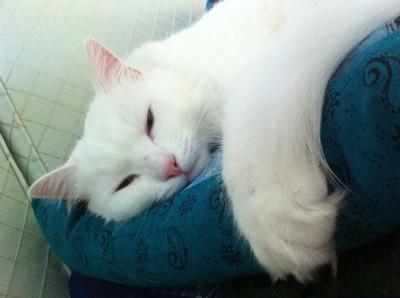 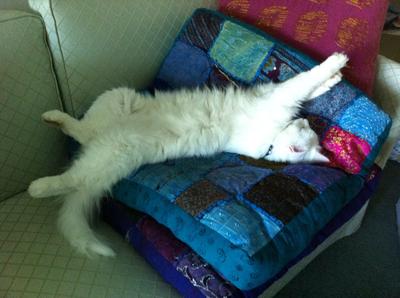 My cat Spook was found on a roadside when he was about 6 weeks old. A little ball of white fluff. He is now almost 3 years old.

He is very big, very fluffy, he has lots of tufts between his toes and from behind his legs look like he is wearing knickerbockers. He has a straight nose and a large fluffy tail. He doesn't have the lynx ears.

He's very friendly with and will tolerate anything from my sons aged 8 and 12. But he's not so tolerant of adults and can be a bit "spooked" by things but I wonder if this is because of his first few weeks of life?

When he enters a room though he meows and meows his greeting. Here in Sydney Australia we have an annual show called the Royal Easter Show. I was there a couple of days ago and we were lucky enough to see the Maine Coons.

There were three white ones who I swear were the image of Spook. One was much bigger but the other two were about his size. It was looking at my cat on show. I'd never really thought about it until I was faced with cats that looked like him. How do I find out?

Janet: He looks like our cat, Bob! The size, tufts, and "knickers" sound like he has some Maine Coon. Does he have the ruff on his neck? Our Bob doesn't have the tufts on his ears either. Spook is a beautiful boy!!


A cat lover said he looks like a Maine Coon?

By: Asha in North Carolina 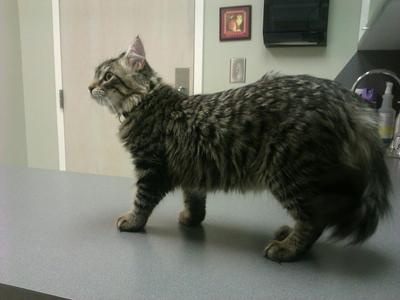 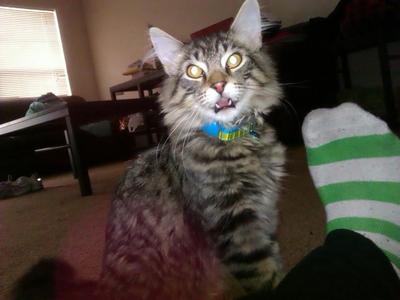 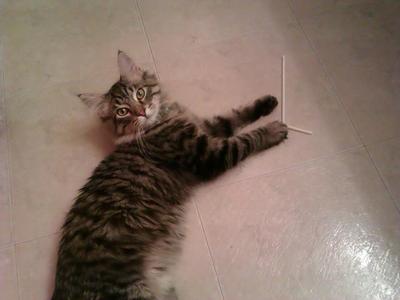 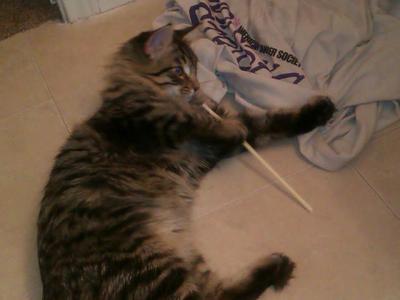 This is my first kitten, since I am naturally a dog lover, but I ABSOLUTELY love my baby boy.

I got Kango when he was about 4 weeks, I know it was too early, however I wasnt aware that he was still so young. Anyways he is now almost 7months old.

He can be the sweetest boy ever when he wants to be, but he can be pretty aggressive at times. Either way, he is mine to keep and I wouldnt want it any other way. He doesnt like all people either, he picks and chooses, and he doesnt like other animals so much either.

It takes him days to adjust to other animals and if he doesnt see them for a while, he reverts back to stage one.

Everyone always says he looks so "wild" or like my friends say "bobcat"... Maine Coon mix maybe? Both parents are short haired, but all of the kittens were long haired but one of them...

Taylor: Kango is sooo cute! I also have a cat whom looks just like your Kango! Mine is also halff Maine Coon and half Tabby!

I recently adopted this cat from a couple that rescued the cat when one of their neighbors moved and left the cat behind. Is she a Coon?