For these cat lovers, the tuxedo cat is the best type of cat. How about you? Do share! 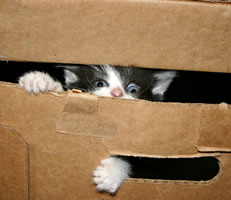 Trogdor in a box

By: Shawn Robert in Ohio

Trogdor is my beautiful baby cat. He is just like a dog; he comes when I call him and he sleeps with me.

He is so friendly and I love him. His breed I'm not sure of, but tuxedo cat sounds like it could be it. 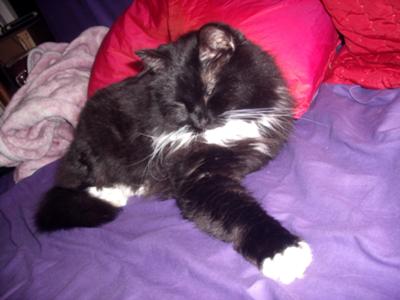 By: rkayne in Seattle, WA

This guy is something else, he sits on command and well as 'sit pretty'. He loves to be on the leash but can Houdini out of it if you don't pay attention!

Smart as anything but sometimes I think that causes him to overthink and do stupid things (like walk around in circles giving a trilly whine right before he destroys something).

He makes up his own games, one of his favourite toys are the silicone bands people wear as bracelets but due to his abnormally long claws we were forced to get him a pack of 50 off an auction site so he has a steady supply.

We have to keep a small hand broom close to the food bowls since he refuses to just eat out of the bowl but has to pick it up with his paw instead so crumbs get all over and our prissy standard breed girl kitty doesn't like to walk through it. Funny thing is, the girl cat is definitely a 'regular' cat but tuxedo as well and a rescue so she has gotten BIG.

Maybe she figured that is what she had to do, he taught her to play and wash her face so maybe she thinks they really are siblings?

His motto is 'Hi, I'm Max and I am here to love on you, play with you and destroy!'.

A cool fact, at one year old he broke his hip (he does not go outside anymore but on a leash). The vet figured he fell a great distance as it did not show any other signs (there were obvious scrapes that made sense to me on that explanation).

He has no hip ball or joint as that is the easiest way to fix that problem...but you cannot tell since he can jump 6 feet up from a sitting position. Talk about flexibility! 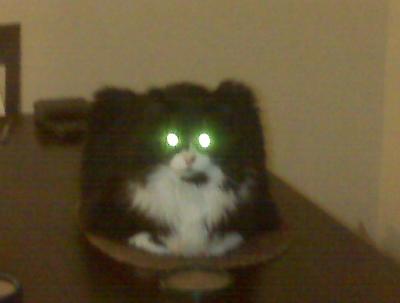 She is a talker and a mouser and a bit naughty but how can you not love her?

Her fur is so soft and she loves everyone but hogs the bed.

By: Brittany in Oklahoma

Hi, my name is Brittany and my tuxedo cat is honestly the best breed of cat I have ever owned.

I am a cat person ( probably guessed that ), and I have owned a few different breeds of cats but, my Mickey is the best of them all. I am not playing favorites just giving my honest opinion.

Mickey has a personality all his own, far different from your everyday kind of cat, and from what I have heard most tuxedo cats do. Although very arrogant and stubborn he is loving and oddly more like a person then some people I know.

Mickey will only drink fresh water and it has to be in his favorite glass, believe me I have tried switching the glasses out and he just wont go for it. Also, he has one restaurant that I order take out from that he loves, anything else is so-so, or he doesn't like it at all. There is a tv show that he actually loves to sit back and watch with me and my husband, any other time he really isn't that interested in tv.

Mickey also has people that he loves and people that he just plain doesn't like. You can tell he doesn't like you when he turns his back and sways over to me, sits down in my lap and then stares you down. It's almost like he is sitting there wondering when you will get out of his house, like some people I know.

I know that any cat person has his or her own idea of the perfect breed or the perfect cat, but I personally think that my tuxedo cat is the best.