Indi in the sink

Maine Coon Cats and water go together like peanut butter and jelly! One of their more charming (and messy) dog-like habits is their love of all things water!

If you love a Maine Coon, you probably have a water story to tell. People often ask about Maine Coon Cats and water, wondering if they like water, play in it, and if it's normal for them to.

Many Coonies love to drink running water, preferably from a faucet. They'll perch next to a sink or tub and either wait patiently, or meow until someone turns it on.

Or, the extra clever ones will actually turn it on themselves! Yes, Maine Coons know how to use their paws. They will open doors, and turn on faucets when they please.

My Leo drank running water from the sink and tub. His method was to stick his whole head under it, and lap up the streams that sprayed off the top of his head!

Some Maine Coon cats even take showers with their people. Mine would poke their heads in to say hi, unafraid of the shower water which I was pretty impressed by.

A few actually like baths, climbing in, "swimming around" and generally enjoying themselves in the water.

Buddha in the sink

At the very least, Maine Coon cats like water enough to tolerate baths pretty well. There are exceptions to every rule, but I found that even if they didn't like baths, they put up with them, never scratching or being difficult.

This was definitely a Maine Coon benefit and a distinct difference from bathing my past moggies!

At the very least, Maine Coon cats like water enough to tolerate baths pretty well. There are exceptions to every rule, but I found that even if they didn't like baths, they put up with them, never scratching or being difficult.

This was definitely a Maine Coon benefit and a distinct difference from bathing my past moggies! 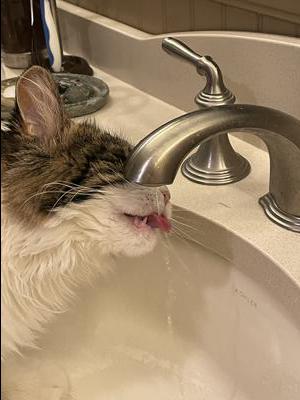 Lexie having a drink

Stacy shares, "Fire loves water, he sits in between the shower liner and shower curtain every time I take a shower and licks the shower wall."

Luna's person, Ripley, says, "She plays with everything, including the cat water fountain. She is fascinated with water and can often be seen with water droplets beaded on her face and paws. She even tries to join me in the shower!"

Parth tells us about Bloopurr, "Much like many Maine Coons, he won't drink still water and never from his water dish. He get most of his hydration from his food which he only enjoys eating in hot/warm water (weirdest guy)."

Bibsy's mom Angie shares, "He loves water, he insists on trying to drink from every water source, sinks, toilets, cuts, and even the bath tub even when he has fresh water (and yes he's spoiled and really likes it with ice).

As soon as I turn on the bath tub water he will come flying in from other floors of the house, he is obsessed with the bath tub. I swear if I let him stay in the bathroom I can NOT get a peaceful bath because he doesn't care if he falls in."

Clair says, "Reggie is a Red/White also 19 months and a nut. He will open doors and cupboards and is a very cheeky cat. He LOVES water and empties the dogs water bowl daily."

About Lucifer, Marlene tell us "He loves water, and plays in the water bowl with his tufted feet which irritates the other cats!"

Sharon's boy, Eliot "is a water hound and drinks only from running water or by dragging his paw through the water then licking it."

Maine Coon Cats and water tend to go hand in hand! If you're considering a Maine Coon, plan on water play, and if you have a water cat, tell us about him or her and we'll add it to this page!

Your Maine Coon Cats and Water: 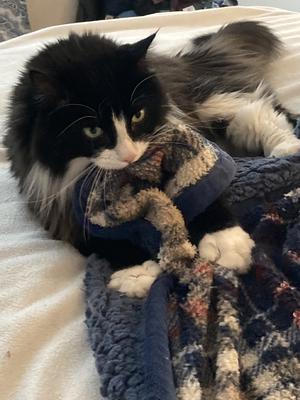 Who, me? I didn’t do anything!

At least twice a day I have to ask, “Sterling, why are you wet?”

He will come to sit on my lap and his head and/or paws will be wet from playing in his drinking fountain or the sink or some other water source only he knows about.

It’s probably his brother’s water bowl but I’m sure he would deny that.

My cat is not a full bred Maine Coon, but will scream and meow till the water faucet is turned on, after he is done drinking his entire head is wet.

Carol from Albany, IN:

My Sterling loved to sit next to our cat fountain. Whenever one of the other cats walked nearby, he would take his paw and slap water at the other cats.

He was also able to hook his paw in the shower door and pull it open. Many times I had to dry off a 24 pound heap of sopping wet fur before I could dry myself!

Watch Where You're Stepping! 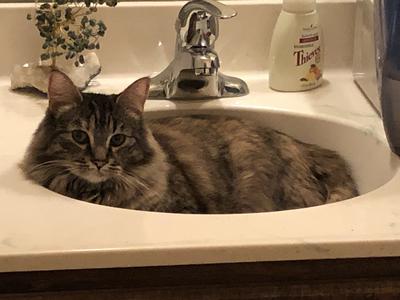 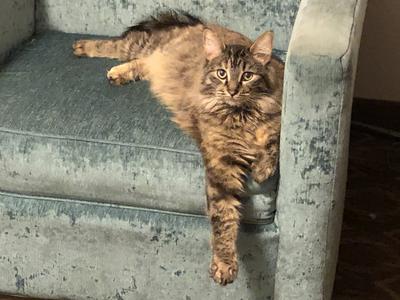 My girl Coonie, Ms. Ripley, pulls her water bowl to the middle of the bathroom floor.

Once, I stepped in it and did a split as the bowl and my foot scooted across the floor!  (I'm more careful now.)

Tell us about your Maine Coon Cats and Water: