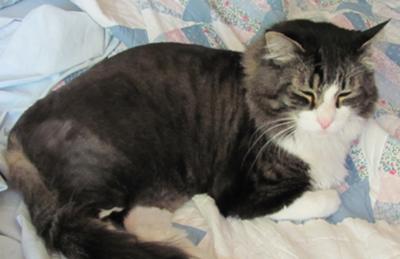 Bubba getting his stripes back

Bubba is our gentle giant 23 pounds worth, he is recovering from having a lion shave, x-rays and finding out he has damage to his back knees.

Bubba is getting his stripes back again as his fur coat grows back in. He is the sweetest part of our crazy daily life.

Biscotti likes to mother Bubba, She use to hiss @ him, now she is a little caregiver to him and she is less than half his size. We wanted to share his progress and updates with all of you.

Hi Joann,
Thanks so much for the update & more photos. Bubba is looking well.

It is so hard when our pets have to go through health things like this, isn't it? They're like our children and we just want them to feel good.

I'm sure he knows that you have taken care of him. He feels loved and well-spoiled. Cats are really smart and intuitive. Biscotti is showing that, too! What a nice girl to look after him, especially when she didn't used to be his biggest fan. That's so sweet!

Hopefully Bubba will be back to his old self before too long. 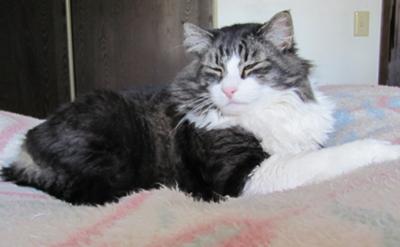 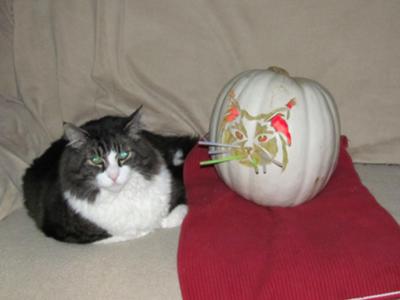 Bubba taking easy with his kitty pumpkin. Bubba is hanging in there, his fur is growing out very, very slowly. He is a very lovable kittie.

We are making every accommodation for him so he can just walk up on the bed and the furniture, since he can no longer jump, it hurts his back knees too much to push off to jump.

We are getting really good @ lifting him up to where he wants to be :).

Thats OK its good exercise for me :)


Thanks for the pictures of Bubba at Halloweentime! And, thanks for the update on his other page. I was wondering how he was. I'm so sorry to hear his knees bother him still, and that it's both. He's such a sweetheart, and he deserves to feel well.

I must say he's some lucky to have you and your husband for his "people." You are clearly doing everthing a person can for a cat. He knows how loved he is and wouldn't want to be anywhere else.

Does Biscotti still look after him? I'll merge his pages together so they will be easier to find. I do hope things look up, healthwise. He seems so happy, I can almost see him smiling in one of the photos. 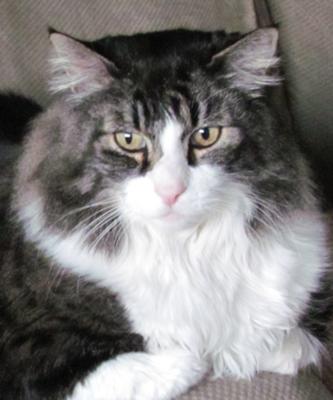 Bubba wants everyone to know that he is feeling much better. He woke up a couple of days ago with the sparkle back in his eyes.

He played with Precious & Biscotti. He says he feels pretty good. Bubba is talking to us a lot more just like the old days.


This is wonderful news from Bubba! We're so glad he has a spring in his step.

Thank you so much for the update. I was thinking about Bubba. He's one tough cookie.

He's so lucky to have the family that he does :) 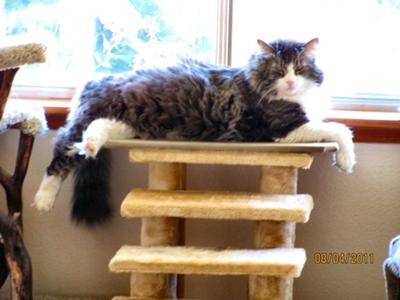 Bubba resting in the front window

Summer time has been pretty good here in southern Oregon for Bubba and the rest of us.

Bubba has another blood clot, good news is it is not moving and it is not causing him any pain. The vet said they just dont do heart transplants on cats, boy if they did and we were sure it would extend his life to be long & healthy we would be in line.

Bubba is eatting good, and more loveable than ever, he does not like to be alone any more, he wants to be right with us or right where he can see us.

Bubba has become very, very close to the other 2 kitties Biscotti & Precious, they sleep beside each other, they clean each other. Bubba has brought so much love in to our home, that we are providing him with all that we can to make his life easy and comfortable.

Bubba wanted me to let everyone know that all the kitties here are beautiful.

Hi Joann,
It's great to hear from you and Bubba! He is looking fabulous. I'm glad to hear he's having a nice summer & bonding with your other cats. He couldn't have found a better family. Bubba is one special boy, I've really enjoyed getting to know him :)
~Carrie 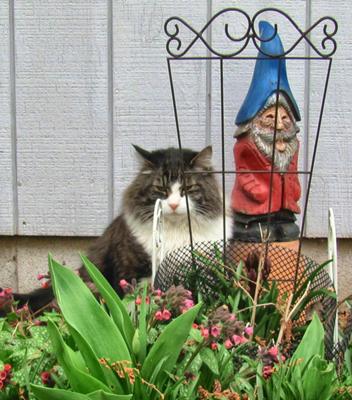 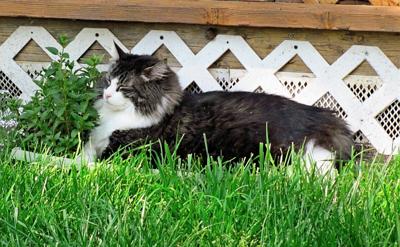 (3/19/2012) Bubba succombed to liver cancer today @ 2:45 pm. Bubba gave us a wonderful bunch of years. He was just diagnoised on Sat. the cancer came on wild and took him from us quickly. Bubba I will always Love you with all of my heart & soul.

[?] Stay Current! Choose your favorite service to get automatic updates!