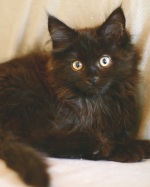 Before our kittens came to us, I had no idea there could be a Black Smoke Maine Coon cat! I was only familiar with the classic brown tabby.

What a variety of Maine Coon colors there are! Alice and her brother Leo make a perfect pair.

Looking for a page just about the awesome Black Maine Coon cat color?

Here it is:
The Black Maine Coon Cat 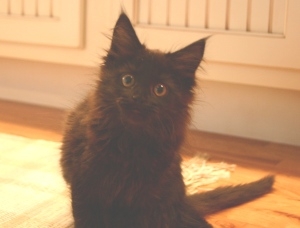 Alice is a dainty lady. She is sweet, petite and perfect in every way! She has a really nice personality. She is not overly affectionate, though. She's always around, enjoying our company.

If there's an open lap, Alice will politely approach, and wait for an invitation, or to be picked up. She is not aloof, but prefers some distance if the house gets crazy. 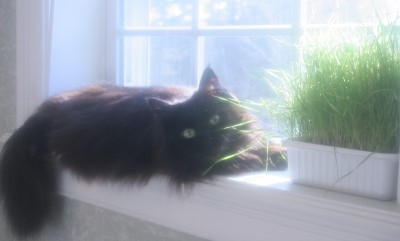 She loves to be present whenever someone is in the bathroom. Her station is on the windowsill, and you can be sure she will be there when you get out of the shower. (Then both the cats go in the shower to check things out.)

Alice has this thing about hiding in the kids' bedrooms at night. She takes advantage of being a black Maine Coon cat and we just can't see her sitting in the corner! We'll put the kids to bed, and occasionally find out at three o'clock in the morning that she had been hiding somewhere.

In my daughter's room, she's been known to start meowing from the closet at odd hours. In my son's room, she hangs out under a chair in the corner.

Not long ago, I heard a stomp, stomp, door slam, then thump back to bed. I thought he was getting up, but he was just letting Alice out of his room! 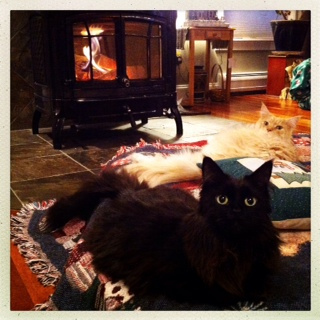 Always Part of the Family

Some Common Coon Traits That She Displays:

That unique Maine Coon voice! Some of the cat sounds that Alice makes include lots of chirps, and a meow that sounds kind of like a honk. It's quite amusing.

If Alice were an outdoor cat, she would be quite a mouser. When we play with the cats, she is unbelievably quick and can jump incredibly high! She always catches the toy we're using, even when we're trying not to let her! Since she is a black Maine Coon cat, sometimes we don't see her coming!

Of course, Alice is a wonderful family pet. When she came home, our daughter was just two years old. As Leo quickly outgrew our daughter's hold, Alice was still easy to pick up. So, to this day Alice remains "her" cat.

One time, I had a friend over for coffee in the morning. My daughter was about halfway down the stairs when my friend nearly fell out of her seat! She thought the cat in my daughter's arms (upside-down, mind you) was a stuffed animal. But Alice had moved, revealing the fact that she was in fact a live cat being carried bottoms-up down a staircase by a three year old! Oh, yes, I told my friend, this was typical. 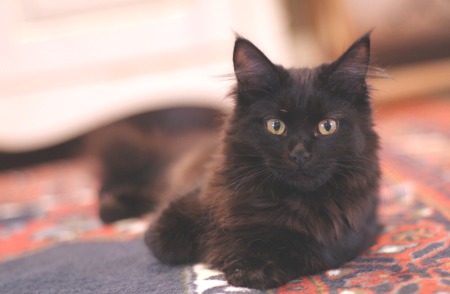 So, what is the difference between Black Smoke and a Black Maine Coon cat? When a kitten is small it is usually all black. Then the soft undercoat fills in. A classic Black Smoke Maine Coon Cat will have a smoky, gray colored undercoat. It will usually be only apparent when you ruffle the fur.

Some cats are clearly a Black Smoke Maine Coon, it even shows in their chest, like a smoky tuxedo look. On others, like Alice, you have to look more closely.

To look at her, you would assume she is just black. But then she has pure white hairs coming out of her ears. And random white strands of fur.

But the way to really tell is to part her fur under her belly, or even on her legs. It looks like she has gray "roots"! The fur is totally gray near the skin, becoming darker all the way to the ends. Pretty neat effect.

Another interesting fact is that many black cats have an accompanying gene that causes their fur to "rust" or become brownish in the sunlight. We see this even though all Alice's sun is in the windowsills. It almost looks like she has a brown mane. There is special shampoo for this, though.

I think this photo above captures Alice's essence better than any other. After more than 17 wonderful years with us, Alice has left for the Rainbow Bridge.

She developed a tumor in her mouth which made eating uncomfortable, and could not be successfully removed. We kept her comfy, attended to, and switched her to pâté style food.

As a result, she started eating constantly, kept up her strength, and amazed both us and her vet by happily staying with us for many more months. We will always treasure this extra time we had to pamper and love her.

In July of 2021, Alice went downhill quickly. She really let us know that it was her time. I will forever appreciate how clear she was. There was no guessing if she could go on longer. On a Monday morning, we made that difficult decision all pet parents dread. It was calm, peaceful and loving.

I hope you've enjoyed reading about Alice, our forever treasured Black Smoke Maine Coon cat. All Maine Coons are different, in their own way. But it's their wonderful Maine Coon characteristics that keep us hooked!