Basil, Fire and Fluff are three of the first maybe-Maine Coons on the site!

My cat Basil seems a lot like a Coon!

He was found hanging around my mother's house and I adopted him.

He's very friendly, affectionate and loves his cuddles(likes to put his head on my chest like a baby!).

He's great around kids and other cats and even washes our kitten! He's a very gentle soul.

He follows me everywhere and likes to chat when he wants a cuddle. He loves to drink water directly from a tap - no bowls please!

He loves to play and he can jump very high in the air as he does so.

He also seems to think he's part dog; stands up on his hind legs 'begging' and when he goes to sleep, he likes to lay his head on his front paws.

He is almost always at my heels.

He has a very long body, looks fatter than what he is because of all that fur!

He also has white tufts between his toes and a tail like a fox (hence his name).

He's nearly four years old and yet still has a hint of blue in his eyes. Very much still a kitten at heart.

Is he part coon?
Lucy

Wow, Basil's personality sounds just like my Leo's! You've clearly done your homework, and Basil has the dog-like personality down pat. He sounds like a sweet boy.

With that personality, and his fluff (tail and toes particularly) I would think he very well could be a Maine Coon mix.

There are some cats that look so strongly like a Maine Coon that we can say "yes, he's probably a Coon mix!" and some who are probably not a Coon mix. Basil falls right in between.

He certainly could be. I wish I could be more definitive for you! It's so hard to say, based on appearance, with a natural breed, and a mix at that. I think he might be.

So, the rest is up to you. Do you think Basil is a Maine Coon mix?

Basil sounds like a joy to have. These are great photos, we'll be sure to add him to the photo galleries!

Thanks for sharing Basil,
~Carrie

Me too
by: Wendy

Found a kitten behind a store and when she grew into a furball . She has a HUGE mane around her neck about 4 inches long.

Medium to large body. She's very shy with strangers but super loving. Climbs on to my chest and outs her face just inches from mine and purrs.

She follows me thru the house meowing demanding I sit down so she can get in my lap. 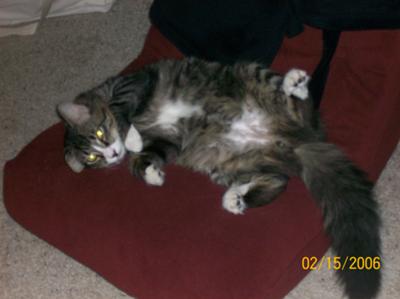 I've been reading about the traits of a Maine coon and my cat Fire fits some of the traits.

Fire was a stray so i have no idea what he actually is. He's 2 years old and 15lbs. He doesn't like to be held and if he allows anyone to pet him he shows the person where to pet.

If anyone one pets where he doesn't want to be petted he bites. He loves water, he sits in between the shower liner and shower curtain every time I take a shower and licks the shower wall.

He is very protective of me. One day I was sleeping in my room and my sister came up to check on me and he growled at her.

The only time he talks is when he has a certain toy in his mouth. I've never heard him talk without it.

The picture I've sent is from when he as about 6 months old. He has the M on his forehead. I've been told that's a physical trait of a Maine coon.
Thanks for taking your time to read this! Please get back to me=]

Fire sounds like quite an original! He's lucky to have been rescued by you.

Some of the traits you mention are definitely Maine Coon traits, like enjoying water, talking, and his large size.

A couple of the traits he has are actually not Coon traits. Being protective or aggressive is probably due to his being a rescued cat. He wasn't properly socialized before he came to you. Maine Coons are known for being friendly and laid-back.

We have a couple related pages that make me think of Fire: Characteristics of Maine Coon Cats, which mentions some of these things, and Maine Coon Info Q & A.

Since Fire was a stray, he could be a Maine Coon mix, though we can't know for sure!

Have fun with him!
~Carrie

We adopted Fluffmodius and another kitty (Anastasia) from a kitty rescue.

They told us the kittens were found stray at some nearby boat docks. We fell in love with them both instantly, my kids LOVED Fluff's personality (he is a total goofball!).

Both are beautiful cats and we were told that Fluffmodius was a Domestic Medium Hair. I first became "suspicious" of his heritage because of his long, lanky, awkward body that was WAY different than our other cat's.

He has an extra long feathery tail, his fur is long in some spots and shorter in others...He has very long tufts of fur between his toes, and those extra long whiskers and ear hair are crazy! As far as his personality, he kind of acts like a dog...strange, I know...but I have taught him to "Speak" for treats (and ice, he loves ice).

It was very easy due to the fact that he "talks" a LOT! The pics i have included are Fluff when he is (about?) 5 months old.

I would love to know, because I had been researching Maine Coons already having my suspicions, when the pest control guy came in to do an inspection he saw Fluffmodius and picked him up saying "Oh, look! You have a Maine Coon!".

So there was my second layman's opinion, was wondering what an expert on the subject might think! Either way, he has been a WONDERFUL addition (and comic relief) to our home and we love him SO much!!! Thanks for your time!

You have two stunning kittens there! Who could have possible abandoned them? Clearly they are bringing lots of fun to your house!

Well, Fluffmodius has a very strong case for being a Maine Coon Mix! He has all the tell-tale signs, and a fabulous tail to boot! His long, lanky body is an indication that he'll get to be rather large, too.

As you know, nothing is for certain, and the heritage of rescued cats is a mystery. If Maine Coons looked like, say, Siamese, it would be so much easier to say, "oh yes there are those defining marks!"

It's entirely possible he's a Domestic Medium Hair. But with everything you've described personality-wise, plus that tail and the furry ears & toes, I think you are totally entitled to tell folks you think Fluffmodius is a Maine Coon Mix. Who would possibly disagree?

Thanks for sharing your beauties! They have super-cool names, by the way. Keep us updated as they grow, too!

Top of Basil, Fire and Fluff